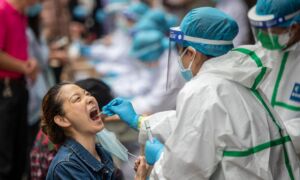 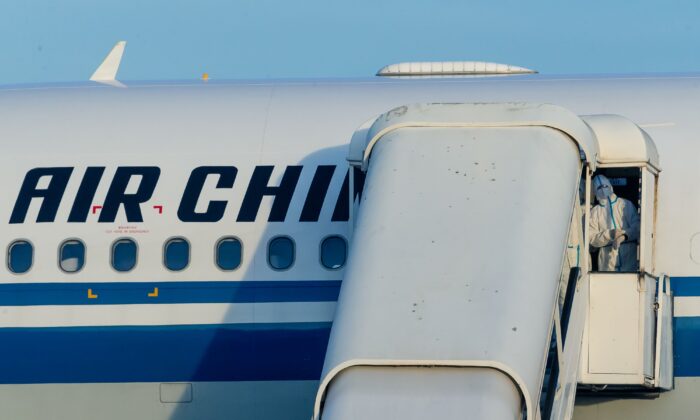 A man wearing personal protective equipment looks outside an Air China plane in Zimbabwe on May 11, 2020. (Jekesai Njikizana/AFP via Getty Images)
Trump Administration

The United States is banning Chinese flights to and from America as retaliation for China failing to let U.S. carriers freely conduct operations.

President Donald Trump’s administration said seven China-based airlines, including Air China Limited and Xiamen Airlines, will not be able to fly to or from the United States.

An order from the U.S. Department of Transportation said it was “responding to the failure of” China “to permit U.S. carriers to exercise the full extent of their bilateral right to conduct scheduled passenger air services to and from China.”

As a result of that failure, the United States “is suspending the scheduled passenger operations of all Chinese carriers to and from the United States,” wrote Joel Szabat, assistant secretary of aviation and international affairs.

The order is dated June 3 and goes into effect June 16 if Trump so orders, the Department of Transportation said in a statement.

“The Department will continue to engage our Chinese counterparts so both U.S. and Chinese carriers can fully exercise their bilateral rights. In the meantime, we will allow Chinese carriers to operate the same number of scheduled passenger flights as the Chinese government allows ours,” it stated.

An agreement originally established in 1980 and later amended governs flights between China and the United States.

Among other things, the agreement establishes rights for carriers of both parties to fly between the country, including the right to “operate combination and all-cargo services with full traffic 2 rights… [f]rom any point or points in the United States…to any point or points in the ‘People’s Republic of China open to scheduled international services,” with frequency limitations in the case of certain Chinese airports.

Each party shall take appropriation action “to ensure that there exist fair and equal rights for the designated airlines of both Parties to operate the agreed services on the specified routes so as to achieve equality of opportunity, reasonable balance and mutual benefit,” the agreement states.

The current situation stems from the beginning of the COVID-19 pandemic, which started in China last year.

In January, American carriers began drawing down their scheduled U.S.-China flights, as did most Chinese carriers. In early January, some 325 combination flights operated weekly between the countries. That number dramatically decreased to 20 weekly flights. That slightly increased in mid-March to 34 weekly flights, all operated by Chinese carriers.

On March 26, China’s civil aviation authority issued a notice saying Chinese airlines could maintain one weekly scheduled flight on one route to any given country. Foreign airlines were limited to just one weekly flight on one route to China but had to refer to their flight schedule from March 12 for the maximum overall limit. By that date, U.S. airlines weren’t flying to and from China because of the pandemic, though Chinese carriers were generally operating some flights.

Describing the date as “arbitrary,” Szabat said the notice “effectively precludes U.S. carriers from reinstating scheduled passenger flights to and from China and operating to the full extent of their bilateral rights, while Chinese carriers are able to maintain scheduled passenger service to and from each foreign market served as of the baseline date, including the United States.”

Before the notice was made, American carriers planned to reinstate flights to China in early June. United and Delta planned to start flying to China again in early May.

U.S. officials repeatedly raised objections to China’s civil aviation authority, including on a May 14 call, but the authority said in a letter on May 25 suggesting the notice won’t be altered.

If the policies are adjusted, then the department will revisit the order it announced on June 3.