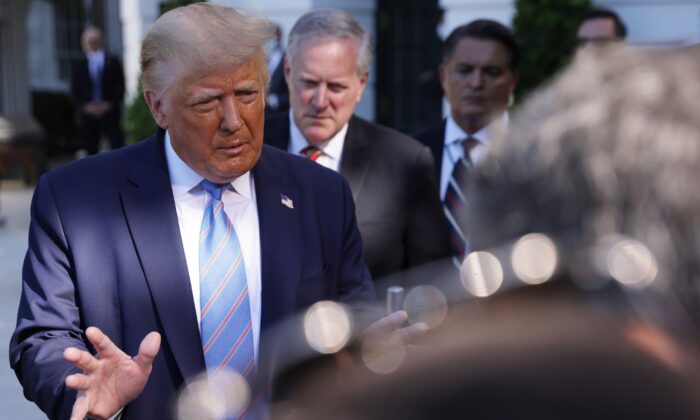 The Trump administration this week submitted a petition to the Federal Communications Commission (FCC) as part of an effort to prevent online censorship.

The Department of Commerce filed a petition to the commission on July 27 requesting clarification on Section 230 of the Communications Decency Act, including whether the act permits social media companies that alter or editorialize users’ speech to escape civil liability.

“Provide clearer guidance to courts, platforms, and users, on what content falls within (c)(2) immunity, particularly section 230(c)(2)’s ‘otherwise objectionable’ language and its requirement that all removals be done in ‘good faith,'” the petition states.

The FCC was also asked to provide transparency requirements on the moderation practices that platforms use.

“Many Americans rely on online platforms to stay informed and connected, sharing their thoughts and ideas on issues important to them, which can oftentimes lead to free and open debate around public policies and upcoming elections,” Secretary of Commerce Wilbur Ross said in a statement.

“It has long been the policy of the United States to foster a robust marketplace of ideas on the Internet and the free flow of information around the world. President Trump is committed to protecting the rights of all Americans to express their views and not face unjustified restrictions or selective censorship from a handful of powerful companies.”

The petition came after President Donald Trump issued an executive order in May aimed at preventing people from being censored online.

Trump said social media companies such as Twitter and Facebook wield immense power to shape how the public sees events and are using the power to censor, delete, and disappear information.

Twitter in particular has ramped up censorship of Trump himself, hiding some of Trump’s tweets from users or attaching a warning to them, while not touching the account of former Vice President Joe Biden, the presumptive Democratic presidential nominee.

In a statement drawing attention to the petition, White House press secretary Kayleigh McEnany said Trump “will continue to fight back against unfair, un-American, and politically biased censorship of Americans online.”

Section 230 is widely seen as shielding social media companies from liability but is coming under scrutiny because of tech giants’ escalation of censorship.

According to the Congressional Research Service, a nonpartisan group that provides reports to Congress, Section 230 generally prevents some companies from being held liable for hosting content that someone else created.

“For example, if someone writes and posts a defamatory statement on Twitter, the defamed person could sue the tweet’s author,” a report (pdf) from June stated.

The law was enacted in 1996 after a trial court ruling opened up an online platform to liability for hosting defamatory speech because the platform had said it would police its site for unwanted speech.

The service said it remains an open question whether the FCC is authorized to issue rules interpreting Section 230, a question that may only be resolved by a court ruling.

The FCC is an agency overseen by Congress that regulates interstate and international communications by radio, television, wire, satellite, and cable. It has five commissioners, including Chairman Ajit Pai.

The rules the Department of Commerce proposed “are ill-advised, and the Commission should dispose of this Petition as quickly as possible,” Commissioner Geoffrey Starks said in a statement.

The department “seems to have failed to grasp how vast and diverse the ecosystem of interactive computer services is,” he said. “Every comment section on the Internet would be subject to scrutiny. Imposing intermediary liability on those services—or creating an environment in which those services have an incentive not to moderate content at all—would prove devastating to competition, diversity, and vibrant public spaces online.”

Commissioner Brendan Carr said he welcomed the petition, which he described as providing “an opportunity to bring much-needed clarity to the statutory text.”

“And it allows us to move forward in a way that will empower speakers to engage in ‘a forum for a true diversity of political discourse,’ as Congress envisioned when it passed Section 230,” he said in a statement.

There is no set time for dealing with petitions, according to the FCC website. Reviews of petitions include examining whether a new rule is necessary or if less burdensome alternatives could fix issues that arise.