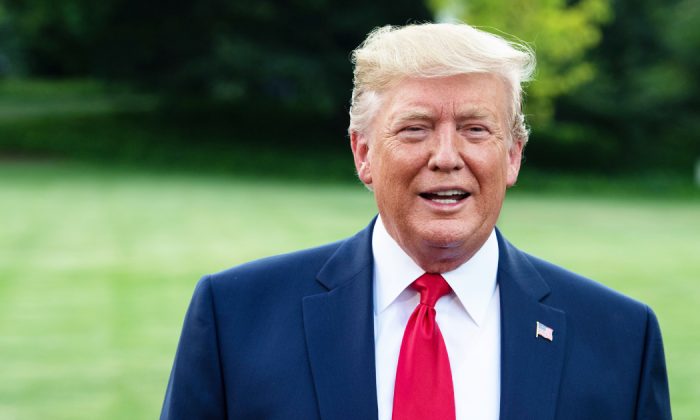 U.S. President Donald Trump speaks to the press at the White House as he departs for Cincinnati to hold a campaign rally in Washington, DC, on Aug. 1, 2019. (Nicholas Kamm/AFP/Getty Images)
US News

The U.S. Court of Appeals for the ideologically evolving 9th Circuit, which until recently routinely resisted President Donald Trump’s policies, dramatically struck down an Obama-appointed district judge’s nationwide injunction against Trump’s asylum policy mere hours after it was issued.

Conservatives have long criticized the often-reversed 9th Circuit, arguing its judges are too liberal and unwilling to follow the Constitution.

But the appeals court is changing.

The 9th Circuit now has seven Trump-appointed judges, which is more than any other federal appellate court, according to a Fox News analysis. Thirteen of the Circuit’s 29 seats are now occupied by Republican-appointed judges, up from just six last year.

“Thanks to Trump, the liberal 9th Circuit is no longer liberal,” The Washington Post observed a few months ago.

The latest ruling, in a case known as East Bay Sanctuary Covenant v. Barr, came late Sept. 9 after Oakland, California-based U.S. District Judge Jon Tigar reinstated a nationwide ban on the administration’s policy of preventing some asylum claimants from filing their claims at the southern border.

The brief order staying Tigar’s ruling, “pending further order of the court,” was signed by Clerk of Court Molly C. Dwyer at the direction of the judges and was based on a 344-page emergency motion filed weeks ago by the Trump administration. There was no narrative provided that explained the rationale behind the appeals court’s decision.

Critics say the kind of restraining order issued by Tigar, which goes well beyond the territorial jurisdiction of his judicial district and the 9th Circuit itself, sometimes called a universal injunction, allows unelected judges to function as lawmakers and, in effect, veto presidential directives.

In his short-lived order Sept. 9, Tigar said he was reinstating the injunction because nonprofits such as one of the plaintiffs in the case can’t predict where asylum-seekers will make their claims. The judge wrote the injunction needed to continue in effect at the national level because there was a “need to maintain uniform immigration policy.”

In-between the issuance of Tigar’s order and its suspension by the appeals court, White House press secretary Stephanie Grisham weighed in.

“Immigration and border security policy cannot be run by any single district court judge who decides to issue a nationwide injunction,” Grisham said.

“This ruling is a gift to human smugglers and traffickers and undermines the rule of law. We previously asked the Supreme Court to set aside the district court’s injunction in its entirety, our request remains pending with the Court, and we look forward to it acting on our request.”

Staying Tigar’s Sept. 9 ruling was the third time in recent months the appeals court modified an injunction blocking the “Remain in Mexico” asylum policy, which requires some would-be asylees to wait in Mexico for U.S. immigration processing.

On Aug. 16, the appeals court upheld Tigar’s July 24 nationwide injunction against the policy but limited its application to the territorial jurisdiction of the 9th Circuit. This meant the administration could continue enforcing the policy along the international border in New Mexico and Texas, which are outside the circuit.

The 9th Circuit Court of Appeals ruled May 7 in a case called Innovation Law Lab v. McAleenan that San Francisco-based U.S. District Judge Richard Seeborg, who, like Tigar, was appointed by former President Barack Obama, had no power to suspend enforcement of the Department of Homeland Security’s Migrant Protection Protocols.