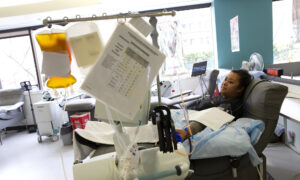 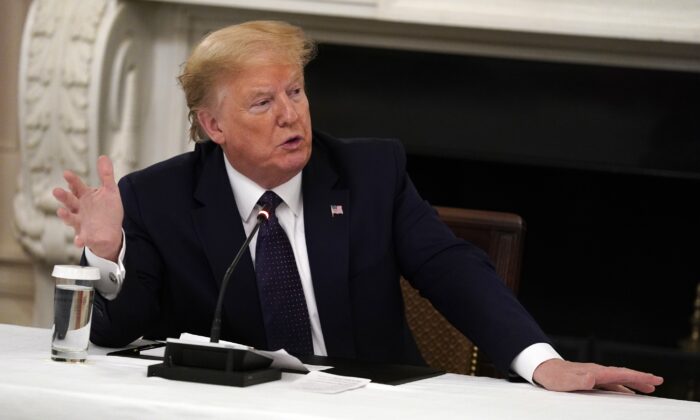 President Donald Trump speaks during a meeting with restaurant industry executives about the coronavirus response, in the State Dining Room of the White House in Washington on May 18, 2020. (Evan Vucci/AP Photo)
Trump Administration

The Trump administration has signed a $354 million contract with a Virginia-based company that will lead efforts to manufacture key medicines and drug ingredients for use in the fight against COVID-19.

Phlow Corp. is heading a team that will make active pharmaceutical ingredients and the chemical compounds for those ingredients, as well as generic drugs that are in short supply because of surges in hospitalized patients due to the CCP (Chinese Communist Party) virus pandemic.

The ingredients and drugs will be manufactured in the United States, including at a new facility to be built in Virginia. The specific drugs weren’t identified but doctors have warned about shortages of hydroxychloroquine because of its widespread use against COVID-19, the disease caused by the CCP virus. Hydroxychloroquine is usually used against malaria, lupus, and rheumatoid arthritis.

The related medication chloroquine, the antibiotic azithromycin, and the sedative fentanyl have also seen large increases in use during the pandemic, according to Premier Inc.

The federal government’s four-year contract with Phlow may be extended, for a total of $812 million. Phlow is a startup founded this year “to help our nation secure its own strategic drug reserve.”

“This advanced manufacturing capability will significantly fortify our nation’s pharmaceutical supply chain for critical medicines, including many required to treat patients hospitalized with COVID-19,” he said in a statement.

Rosemary Gibson, a Phlow board member, told The Epoch Times last month that many countries, including the United States, have become dependent on China for thousands of medicines and ingredients.

“If China shut the door on exports of the core chemicals, and other ingredients to make them, we’ll see, the countries waiting in line to get vital medicines to care for their populations. We’re already beginning to see the pricing rivalry for certain drugs that are now becoming more scarce, because global demand has increased with coronavirus. It’s a very serious situation that we’re approaching,” she said.

The new project Phlow is leading will be seen in the future “as a defining moment and inflection point for protecting American families—and our country—from current and future public health threats,” Peter Navarro, director of the White House Office of Trade and Manufacturing Policy, said in a statement May 19.

Phlow is partnering with Civica Rx, a nonprofit pharmaceutical company aimed at bringing down the cost of drugs; the Medicines for All Institute at the Virginia Commonwealth University; and AMPAC Fine Chemicals, a Las Vegas-based maker of active pharmaceutical ingredients. The group has begun manufacturing chemical ingredients, active ingredients, and finished forms for more than a dozen medicines to treat patients hospitalized with COVID-19.

The team is using a technique called “flow” chemistry, or the mixing of chemical reactions in a tube or pipe, which enables faster reactions and other benefits.

“This technology has not been widely adopted in the generic pharmaceutical industry but when used, it can increase the quality, safety, and volume of medicines, yielding lower costs for Americans,” the team said in a statement.

The government funds come from the Biomedical Advanced Research and Development Authority, which is part of the Department of Health and Human Services.

“America has the capabilities, resources, and expertise to secure our medical supply chains; now the Trump Administration is providing the leadership to make it happen,” Health and Human Services Secretary Alex Azar said in a statement.

“Working with the private sector, HHS is taking a significant step to rebuild our domestic ability to protect ourselves from health threats by utilizing American-made ingredients and creating new American jobs in the process.”