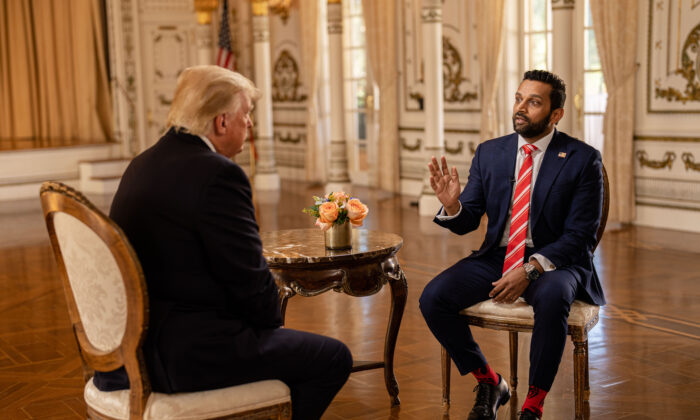 ”They want President Trump to not announce his candidacy for president, and that’s the end goal,” Patel, a National Security Council official under Trump, said in a Tuesday interview with Newsmax. ”Whether [it’s] through some form of impeachment or some criminal charge or a fake news disinformation campaign by the radical left-wing mafia, then that’s just as good to them.”

If Trump “wasn’t shut down by Russiagate, Jan. 6, [impeachment] one, impeachment two, Hunter Biden, Hillary Clinton email scandal, Ukraine phone calls, then this certainly isn’t going to stop him,” Patel remarked of the raid, adding that he believes new documents released this week reveal that high-ranking officials within the Biden administration knew about the raid beforehand.

White House press secretary Karine Jean-Pierre and other administration officials say President Joe Biden had no knowledge of the FBI search of Mar-a-Lago until Trump’s announcement of the raid on Aug. 8.

While Patel did not elaborate, he noted that “when I was a national security prosecutor working on high-level cases, we always informed the White House counsel’s office.”

”And lo and behold … we now see their own memorandum with the White House communicating to the Department of Justice about this investigation, about executive privilege, about waivers of attorney-client privilege, and Joe Biden weighing in personally,” Patel told Newsmax, citing a newly disclosed memo about the matter.

During the interview, the former Trump aide reiterated that the 45th president had a standing declassified order and had the capacity to declassify documents at will.

Over the past weekend, he also told the Wall Street Journal that the FBI likely took boxes of documents relating to the FBI’s Crossfire Hurricane probe into alleged Russian interference in the 2016 election.

Trump on Truth Social last week also pointed to a Jan. 19, 2021, order that he issued to declassify certain documents relating to the Crossfire Hurricane investigation.

Neither the Justice Department nor FBI has issued comments on what documents and materials were taken from Trump’s Mar-a-Lago during the raid, although an unsealed warrant and property receipt show agents took allegedly classified and top secret documents.

The federal judge in the case, Bruce Reinhart, again suggested Monday that he will likely authorize the release of the affidavit after the Justice Department submits its proposed redactions to the legal document. The affidavit should be released, according to Republicans and Trump, because it would show what rationale the federal government used to try and obtain an FBI search warrant.

Also Monday, Trump filed a complaint in the case to demand that Justice Department officials stop their review of the documents until a special master can view them. The former president’s filing also noted that two months before the raid, FBI agents came to Mar-a-Lago and appeared to approve Trump placing a second lock on a storage door.