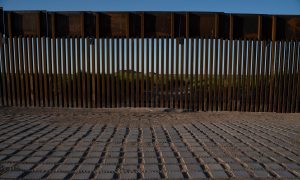 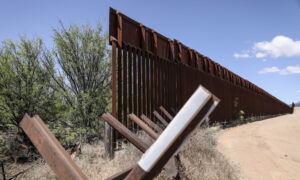 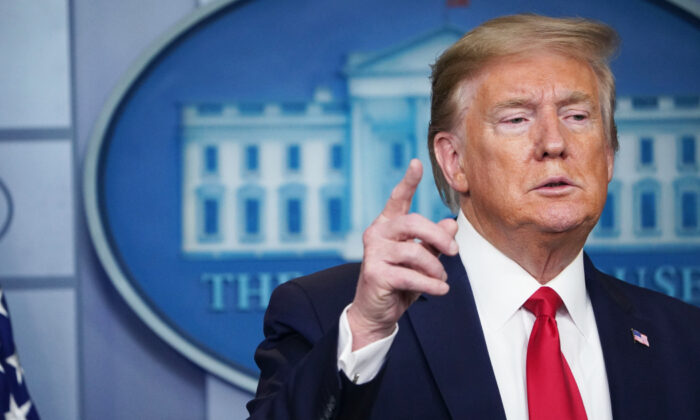 U.S. President Donald Trump speaks during the daily briefing on the novel coronavirus, which causes COVID-19, in the Brady Briefing Room of the White House in Washington on April 22, 2020. (Mandel Ngan/AFP/Getty Images)
Trump Presidency

The Trump administration on April 22 launched an interactive webpage of the U.S.-Mexico border wall which both tracks and streams footage of the progress being made on its construction, as President Donald Trump seeks to fulfill a significant 2016 campaign promise.

Construction of the wall along the southern border between the U.S. and Mexico is being streamed on the U.S. Customs and Border Protection (CBP) webpage via video and drone footage. The webpage also contains an interactive map that allows viewers to click and zoom to view the progress of the border wall.

“President Trump is delivering on his promise to build a border wall system to secure the border,” Acting Customs and Border Protection (CBP) Commissioner Mark Morgan said in a statement.

“Border security is national security, and a strong border wall system is critical to keeping our nation safe.”

The border wall system is good for border communities. In San Diego, illegal drug and human smuggling activity decreased where barriers were deployed. It also supports a safe and secure border community that is more appealing for local businesses, schools and residents. pic.twitter.com/9hNgNubGJy

The video footage streamed on the CBP website shows the construction of the wall that took place between Feb. 1 and Feb. 29 this year, at the El Centro, Yuma, and El Paso Border Patrol Sectors.

Viewers can type in specific areas via a search bar attached to the interactive map, which color-codes the construction of the border wall in red to represent a new border wall system, or dark blue, showing existing barriers.

The website also provides an infographic to update readers on the progress of its completion. So far, since January 2017, 170 miles of the U.S.-Mexico border wall have been completed, using roughly 236,000 tons of steel and 335,000 cubic yards of concrete.

This month, Acting Homeland Security Secretary Chad Wolf said during a White House press conference with Trump that the United States is still on schedule to build between 400 and 450 miles of the new border wall or border “capability” by the end of 2020.

Wolf said his agency is building “miles of the wall every day” despite the CCP (Chinese Communist Party) virus, commonly known as novel coronavirus, pandemic. Reports have stated that Homeland Security, which oversees the Customs and Border Protection agency, is persisting in building the wall.

“We’re up to over 150” miles of wall built along the southern border, he said during a news conference. “We’re continuing to build new miles of wall. And a lot of folks ask about replacement wall or new miles? It’s a new capability on the southwest border that we haven’t had before.”

Wolf said that the border wall allows Border Patrol agents “to focus elsewhere on parts of the border that are very difficult to patrol, so we can use our resources in a different way.”

The wall “includes not only the physical infrastructure but the cameras, the roads, the lightings, the fiber optic cables.” The agency is on the “mark to meet 400, 450 miles by the end of the calendar year.”

Trump said the wall could have an impact on stemming the spread of the CCP virus, which causes the disease COVID-19, inside the United States.

“Now we have got to focus on drugs, and the drugs come in from different methods, and we have the best people at sea anywhere in the world, so we will have a tremendous impact on drugs,” Trump said. “But one of the other things we will also have an impact, we think, on the coronavirus.”

Some activists supporting immigrant rights, however, said that the wall construction is a distraction amid the pandemic or could even, in some cases, facilitate the spread of the CCP virus.

Last week, dozens of congressional Democrats addressed a letter to the Trump administration calling for the construction of the wall to be “immediately” halted amid the pandemic. The letter was spearheaded by Sen. Martin Heinrich (D-N.M.) and Rep. Henry Cuellar (D-Texas) and addressed to Wolf, Attorney General William Barr, and Defense Secretary Mark Esper.

“It is dangerous and unacceptable for border wall construction to continue during this public health crisis,” Cuellar said in a statement. “As medical experts and the Center for Disease Control [and Prevention] implore Americans to stay at home, construction crews continue to work in close quarters, jeopardizing the health of our border communities. This is a public health threat, and it must be stopped.”