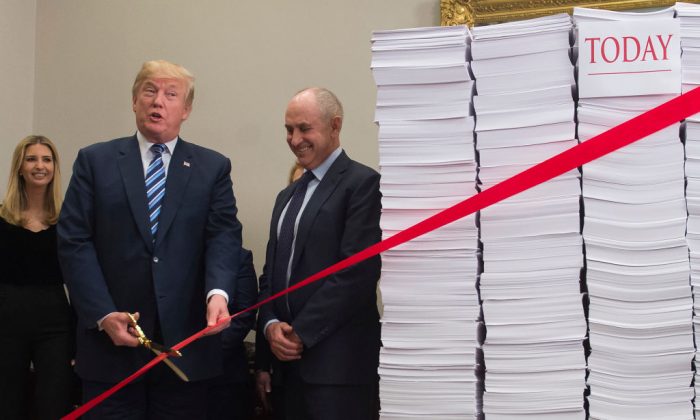 President Donald Trump holds gold scissors as he prepares to cut a red tape tied between two stacks of papers representing the government regulations of the 1960s and the regulations of today after he spoke about his administration's efforts in deregulation in the Roosevelt Room of the White House in Washington on Dec. 14, 2017. (Saul Loeb/AFP/Getty Images)
By Tom Ozimek

The Trump administration’s efforts to relieve American businesses of regulatory burden that can stifle economic growth have led to a year of record-breaking deregulation, while experts say there is more to be done.

While the total number of pages of the Federal Register (pdf)—the ledger that lists government regulations—swelled to 72,564 pages by Dec. 31, the number of rules hit historic lows.

According to Clyde Wayne Crews, a regulation expert and policy vice president at the Competitive Enterprise Institute, the Federal Register published 2,964 final rules.

“This is the lowest count since records started being kept in the mid-1970s,” he wrote in Forbes.

“It is a notable achievement that all three of the lowest-ever annual rule counts belong to Trump. This an even more significant development given that some of Trump’s ‘rules’ are rules written to get rid of or replace other rules,” he noted.

“It is important that for every one new regulation issued, at least two prior regulations be identified for elimination, and that the cost of planned regulations be prudently managed and controlled through a budgeting process,” Trump noted in the order.

Philip Wallach, a senior fellow at the R Street Institute, argued in an op-ed for the National Review that despite the deregulatory efforts of the administration, more remains to be done.

“The old order has proven itself more than capable of withstanding this president’s antiregulatory efforts,” Wallach wrote. “Given three years of experience under Trump, those of us who wish to see America’s administrative state brought to heel must recognize what a long and difficult slog awaits us.”

Some of the gains from the early aggressive efforts on the part of the administration to cut red tape have seen a slight reversal, which experts blame on trade barriers.

“The general story the numbers tell is that the Trump administration has been steadily increasing its pace of regulatory activity,” Young said, blaming the rise on regulations imposed by trade agreements.

“Deregulatory efforts will likely continue in 2020, but will likely to be more than offset by regulatory increases elsewhere,” Crews said. “Trade barriers have more than doubled since 2017. While the USMCA trade agreement will keep tariffs against Canada and Mexico in check, it contains substantial new regulatory burdens and non-tariff trade barriers. Upcoming agreements with China, the United Kingdom, and the European Union, if these happen, due to USMCA’s precedent, they will also likely contain substantial new regulatory burdens.”

Crews compiles Ten Thousand Commandments, an annual review of the size, scope, and cost of federal regulations, which he calls a “large and unappreciated hidden tax.”

“The estimated $1.9 trillion “hidden tax” of regulation is greater than the corporate and personal income taxes combined,” Crews noted in an introduction to the 2019 edition of the review. “If the cost of federal regulations were a country, it would be the ninth largest, behind India and just ahead of Canada.”

The survey also aims to asses the regulatory impact on American businesses and consumers, as well as the overall U.S. economy.

“Each U.S. household’s estimated regulatory burden is at least $14,615 annually on average. That amounts to 20 percent of the average pre-tax household budget and exceeds every item in that budget, except housing,” Crews writes in the report.

The policy expert called Trump’s deregulation drive “the most aggressive effort at regulatory reform in over a quarter century.”

“Policymakers frequently propose spending stimulus as a way to grow economies,” he says in the report. “It rarely goes well. A regulatory liberalization stimulus, on the other hand, can offer confidence and certainty for businesses and entrepreneurs.”

‘One of the Four Points of the Economic Compass’

On Dec. 31, on CNBC’s Squawkbox, Navarro reiterated the reasoning behind his predictions for a bullish stock market run in the wake of Trump’s election.

“With your prediction back then, you gave four main tenets of what was going to cause that on Nov. 9. Do you remember the four that you said?” the host asked Navarro.

“Indeed I do. Four points of the economic compass: deregulation, tax cuts, the unleashing of our energy sector, and fair and reciprocal trade. And bingo, the president did it,” the trade adviser said.

In remarks on Dec. 6 at a Roundtable on Small Business and Red Tape Reduction Accomplishments, Trump credited the deregulation drive for stock market expansion.

“And very big, I think, is the regulation cuts,” Trump said. “Because even before we were able to get the tax cuts so successfully from Congress, we started cutting regulations immediately, and that had a big impact. And that’s why we went up so much between the election victory. So you’d say, really, from Nov. 9, the day after the election, up until Jan. 20, the Inauguration, the stock markets and jobs went—literally, went through the roof.”

“We are now reducing the size, scope, and cost of federal regulations for the first time in decades, and we are already seeing the incredible results,” Trump said.