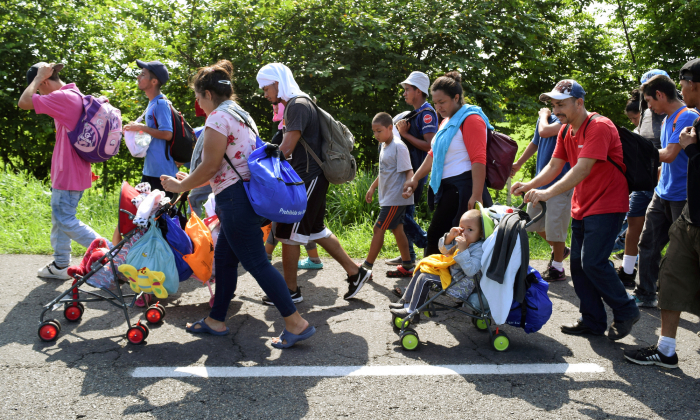 Migrants from Central America walk on a highway during their journey towards the United States, in Ciudad Hidalgo, Chiapas state, Mexico on June 5, 2019. (Jose Torres/Reuters)
US News

The rule was set to be published in the Federal Register on July 16.

The rule governs asylum claims from immigrants who enter or attempt to enter the United States across the southern border after failing to apply for protection from persecution or torture while in a third country through which they travel, such as Mexico, and is being enacted by the Departments of Justice and Homeland Security.

“Pursuant to statutory authority, the Departments are amending their respective regulations to provide that, with limited exceptions, an alien who enters or attempts to enter the United States across the southern border after failing to apply for protection in a third country outside the alien’s country of citizenship, nationality, or last lawful habitual residence through which the alien transited en route to the United States is ineligible for asylum,” the interim final rule states.

The rule is not retroactive.

In addition, the rule “would also require asylum officers and immigration judges to apply this new bar on asylum eligibility when administering the credible-fear screening process applicable to stowaways and aliens who are subject to expedited removal under section 236(b)(1) of the Immigration and Nationality Act.”

According to the administration, the Attorney General and Secretary of Homeland Security have authority delegated by Congress to make rules such as the one slated to be enacted.

The administration noted that the percentage of migrants claiming to be entering the United States because of persecution in their home country has jumped from around 5 percent to above 40 percent, leading to an explosion of cases to be heard by immigration judges.

“Only a small minority of these individuals, however, are ultimately granted asylum,” the administration wrote.

“The large number of meritless asylum claims places an extraordinary strain on the nation’s immigration system, undermines many of the humanitarian purposes of asylum, has exacerbated the humanitarian crisis of human smuggling, and affects the United States’ ongoing diplomatic negotiations with foreign countries.”

There are some exceptions in the rule: If someone has been trafficked, if the country the migrant passed through did not sign one of the major international treaties that govern how refugees are managed (though most Western countries have signed them) or if an asylum-seeker sought protection in a country but was denied, then a migrant could still apply for U.S. asylum.

The policy is almost certain to face a legal challenge. U.S. law allows refugees to request asylum when they arrive at the United States regardless of how they did so, but there is an exception for those who have come through a country considered to be “safe.” But the Immigration and Nationality Act, which governs asylum law, is vague on how a country is determined “safe;” it says “pursuant to a bilateral or multilateral agreement.”

Right now, the United States has such an agreement, known as a “safe third country,” only with Canada. Under a recent agreement with Mexico, Central American countries were considering a regional compact on the issue, but nothing has been decided. Guatemalan officials were expected in Washington on Monday, but apparently a meeting between Trump and Guatemalan President Jimmy Morales was canceled amid a court challenge in Guatemala over whether the country could agree to a safe third with the United States.

Trump administration officials say the changes are meant to close the gap between the initial asylum screening that most people pass and the final decision on asylum that most people do not win.