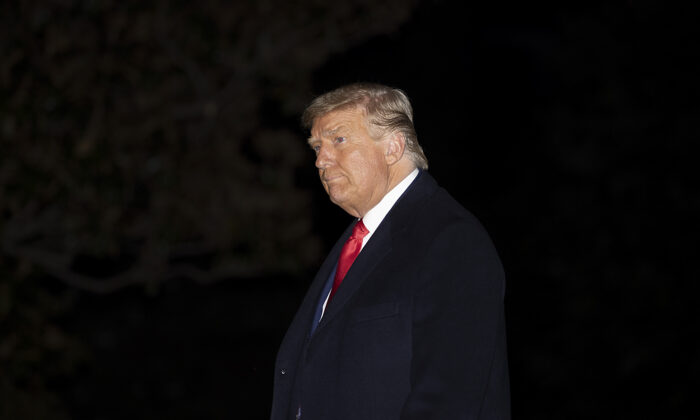 President Donald Trump walks on the South Lawn of the White House on Oct. 20, 2020. (Tasos Katopodis/Getty Images)
US News

After an “anonymous” federal government employee staffer went on the record and revealed himself to be a former staffer for the Department of Homeland Security (DHS), the White House and GOP went on the offensive, describing the staffer as a “low-level” official who didn’t work in the White House while asserting that The New York Times did the country a disservice by publishing his article.

“Miles Taylor today managed to discredit himself, The New York Times, and CNN, all in one fell swoop,” White House spokesman Brian Morgenstern told Fox News on Oct. 28. “And that is no easy feat. He showed that The New York Times will publish anonymous smears by a 20-something staffer, but they won’t publish on the record evidence from Tony Bobulinski with contemporaneous documents and devices proving that the Biden family may be compromised by communist China.”

Taylor, in a post on Medium, said he was the one who penned the “anonymous” article for the NY Times that claimed he was part of a “resistance inside the White House.” Taylor now works as a CNN contributor and endorsed Democrat Joe Biden in August.

“Much has been made of the fact that these writings were published anonymously. The decision wasn’t easy, I wrestled with it, and I understand why some people consider it questionable to levy such serious charges against a sitting President under the cover of anonymity. But my reasoning was straightforward, and I stand by it,” Taylor wrote.

He also claimed on CNN later on Oct. 28 that Trump will pursue “Nazi-like immigration policies” if he’s reelected.

Sen. Marco Rubio (R-Fla.), the acting head of the Senate Intelligence Committee, described the NY Times’ choice to publish Taylor’s piece as a “type of click-bait outrage journalism,” saying that Taylor was never a “member of the [DHS’s] leadership” at the time of the article’s publication. The NY Times had suggested otherwise when it was published in 2018.

Donald Trump is a man without character. It’s why I wrote “A Warning”…and it’s why me & my colleagues have spoken out against him (in our own names) for months. It’s time for everyone to step out of the shadows. My statement: https://t.co/yuhTgZ4bkq

During an Oct. 28 rally, the president described Taylor as a “low-level staffer, a sleazebag, who’s never worked in the White House.”

“The whole thing was just one more giant hoax from the Washington swamp and a corrupt special interest group,” Trump said. “I’ll tell you what—this guy, in my opinion, should be prosecuted. He should be prosecuted. The left wing media and the swamp are doing everything in their power to try to stop us.”

“His phony book was just passed on fake articles and left wing outlets,” Trump said, according to Fox News. “He worked with the, listen to this, the fake news New York Times, and he’s an employee of Google. Isn’t that nice?”

Trump on Twitter wrote that he had “never even heard” of Taylor.

Taylor resigned from his job at the DHS in June 2019 and took a public policy role with Google later that year. He became a CNN contributor in September. Google confirmed to Fox News that he is still an employee but is on leave.