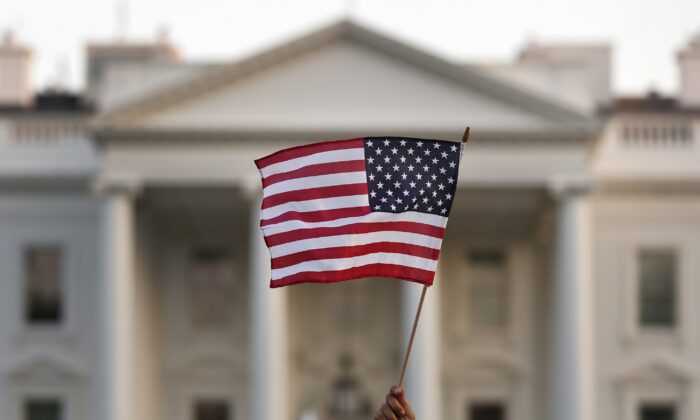 A flag is waved outside the White House in Washington in a 2017 file photo. (Carolyn Kaster/AP Photo)
US News

The U.S. government said that women traveling to the United States primarily to give birth for the purpose of getting their child U.S. citizenship is no longer permissible.

The new rule “establishes that travel to the United States with the primary purpose of obtaining U.S. citizenship for a child by giving birth in the United States is an impermissible basis for the issuance of a B nonimmigrant visa,” or a tourism or business visa, the State Department announced (pdf).

“The Department does not believe that visiting the United States for the primary purpose of obtaining U.S. citizenship for a child, by giving birth in the United States—an activity commonly referred to as ‘birth tourism’—is a legitimate activity for pleasure or of a recreational nature, for purposes of consular officers adjudicating applications for B nonimmigrant visas.”

Consular officers will be instructed to deny visas to women they think are traveling to the United States primarily to give birth.

People traveling to the United States for “pleasure,” or as tourists, should be planning to engage in “legitimate activities of a recreational character, including tourism, amusement, visits with friends or relatives, rest, medical treatment, and activities of a fraternal, social, or services nature,” the department stated.

“This rule change is necessary to enhance public safety, national security, and the integrity of our immigration system,” the White House said in a statement.

“The birth tourism industry threatens to overburden valuable hospital resources and is rife with criminal activity, as reflected in Federal prosecutions.”

“Foreign governments or entities, including entities of concern to the United States, may seek to benefit from birth tourism for purposes that would threaten the security of the United States.”

The department estimates that thousands of children are born in the country to nonimmigrants every year. According to the Center for Immigration Studies, which pushes for stricter immigration laws, about 33,000 foreigners on visas give birth in the United States each year.

“Additionally, the applicant must provide the projected duration and cost of treatment and any incidental expenses. The applicant must also establish to the satisfaction of the consular officer that he or she has the means and intent to pay for the medical treatment and all incidental expenses, including transportation and living expenses, either independently or with the pre-arranged assistance of others.”

The White House said the rule changes are for the benefit of the country in both the short and long term.

“Closing this glaring immigration loophole will combat these endemic abuses and ultimately protect the United States from the national security risks created by this practice,” it stated.

“It will also defend American taxpayers from having their hard-earned dollars siphoned away to finance the direct and downstream costs associated with birth tourism. The integrity of American citizenship must be protected.”