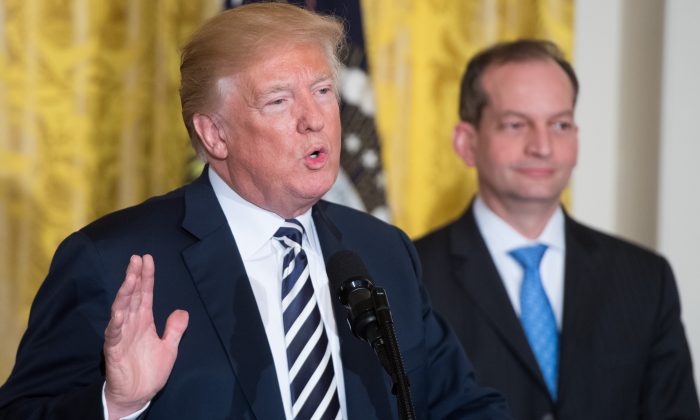 President Donald Trump speaks alongside Secretary of Labor Alexander Acosta (R) during the National Teacher of the Year reception in the East Room of the White House on May 2, 2018. (Saul Loeb/AFP/Getty Images)
Trump Administration

The Trump administration has set a goal to have 1 million new apprenticeships created in the country in the coming year, Labor Secretary Alex Acosta said.

Speaking to the National Association of Counties on March 4, Acosta expounded on the administration’s focus on apprenticeships and rethinking avenues for success for young Americans in general.

He touted the positive economic indicators, including low unemployment (averaging 3.9 percent in 2018) and wage growth of 3.5 percent, based on average weekly earnings for private nonfarm payrolls.

“We’ve seen something we’ve never seen before,” Acosta said, pointing to the fact that there are more than 7 million job openings in America with only about 6 million Americans considered unemployed.

“The challenges are preparing individuals and offering them the skills that this economy is looking for.”

He recalled his recent visit to an apprenticeship facility for the United Brotherhood of Carpenters in Missouri. Not only did the participants finish their training just 15 credits short of a degree (thanks to an agreement with the local community college), but, after leaving, their lowest starting wage was $28 an hour.

“That is a good, family-sustaining wage,” Acosta said.

The administration reached almost 500,000 new apprenticeships over the past two years, he said, committing to a goal of a million more in the coming year.

In March, the administration will announce $150 million in grants to community colleges to support apprenticeships. The colleges are asked to find “matching partners” for the programs in the business sector, Acosta said. The government will pay three dollars for every dollar invested into the programs.

“I bet you that when it comes time, those businesses that invested in those programs are going to hire the individuals that are graduating,” he said.

The Labor Department also has launched a website, Apprenticeship.gov, that allows Americans to search for apprenticeship opportunities by location.

The Trump administration is the first in decades to heavily focus on apprenticeships and on the benefits of blue-collar jobs, many of which offer a solid wage.

For decades, American schooling has been dominated by the mantra of college as the surest path to success, only to see millions of young and not-so-young Americans burdened with the total of nearly $1.5 trillion of student debt, and in many cases, for degrees that hold little employment value.

“The question is: What signals are we sending to young Americans? Are we saying, ‘you only have one path to success and all other paths are no good?’ Or are we saying there are multiple paths?” Acosta asked.

“Is that the signal that we’re sending in high schools?”