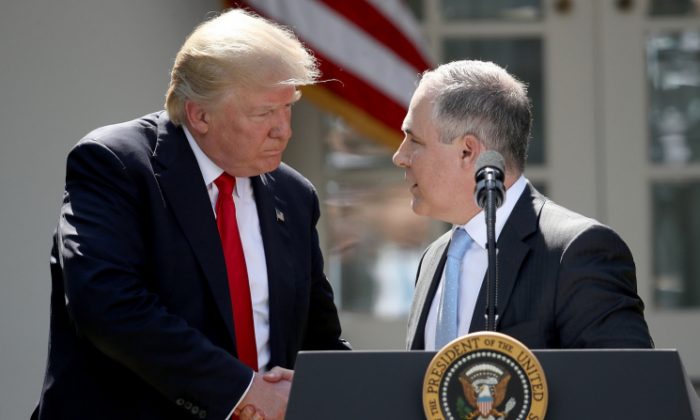 U.S. President Donald Trump shakes hands with EPA Administrator Scott Pruitt after announcing his decision for the United States to pull out of the Paris climate agreement in the Rose Garden at the White House in Washington, DC on June 1, 2017. (Win McNamee/Getty Images)
Trump Administration

The administration of President Donald Trump will soon end the practice of using “secret science” to justify environmental regulations, the head of the Environmental Protection Agency (EPA) told The Daily Caller.

Scott Pruitt, who Trump appointed to lead the EPA, will terminate a longstanding policy that allowed regulators to rely on hidden scientific data to draft rules. Such regulations cost American taxpayers and businesses $344 billion during the eight years of the Obama administration, according to data from the American Action Forum.

“We need to make sure their data and methodology are published as part of the record,” Pruitt told The Daily Caller. “Otherwise, it’s not transparent. It’s not objectively measured. And that’s important.”

Pruitt’s new rules would require EPA regulators to only consider scientific studies that make the underlying data and methodology available to the public. Any studies funded by EPA would also have to make data publicly available.

“When we do contract that science out, sometimes the findings are published; we make that part of our rulemaking processes, but then we don’t publish the methodology and data that went into those findings because the third party who did the study won’t give it to us,” Pruitt said. “And we’ve said that’s fine. We’re changing that as well.”

We need to make sure their data and methodology are published as part of the record. Otherwise, it’s not transparent. It’s not objectively measured, and that’s important.
— Scott Pruitt, administrator, Environmental Protection Agency

Conservatives have criticized the EPA’s use of secret science for years, arguing that costly regulations and taxpayer-funded studies should make the underlying data transparent. Democrats and environmental activists have opposed the idea.

While Pruitt prepares to make the rule change on the agency level, lawmakers on Capitol Hill are well along in the process of making the same change a legal requirement. Last year, Rep. Lamar Smith (R-Texas) introduced the HONEST Act, which would prohibit the use of secret science at the EPA. The bill was passed in the House in March last year.

“If we use a third party to engage in scientific review or inquiry, and that’s the basis of rulemaking, you and every American citizen across the country deserve to know what’s the data, what’s the methodology that was used to reach that conclusion that was the underpinning of … rules that were adopted by this agency,” Pruitt said.

The EPA imposed wide-ranging air quality regulations based on two studies from the 1990s that did not reveal their data. One of the agency’s costliest regulations, called MATS, relies on these hidden studies to calculate the regulations’ benefit to the public.

The Democrats’ main argument against making the data public is that it would compromise patient privacy. But Steve Milloy, a senior fellow at the Energy and Environmental Legal Institute, says such data is anonymous and is already used in studies with data that is open to the public.

“The availability of such data sets is nothing new,” Milloy told The Daily Caller.

“The state of California, for example, makes such data available under the moniker, ‘Public Use Death Files,’” Milloy said. “We used such data in the form of over 2 million anonymized death certificates in our recent California study on particulates and death.

“Opponents of data transparency are just trying to hide the data from independent scrutiny,” Milloy added. “But the studies that use this data are taxpayer-financed, and they are used to regulate the public.”