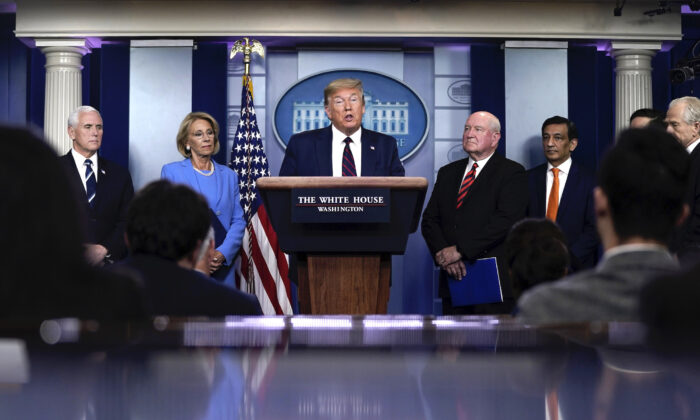 President Donald Trump speaks as Vice President Mike Pence, Secretary of Education Betsy DeVos and Secretary of Agriculture Sonny Perdue look on during a briefing on the coronavirus pandemic in the press briefing room of the White House in Washington, on March 27, 2020. (Drew Angerer/Getty Images)
Trump Administration

Nine federal agencies on Monday adopted a new set of rules that would make it easier for religious organizations to participate in federally funded social service programs.

First drafted in January in response to President Donald Trump’s May 2018 Executive Order 13831, the rule covers the Departments of Agriculture, Education, Health and Human Services, Homeland Security, Housing and Urban Development, Justice, Labor, and Veterans Affairs, as well as the Agency for International Development. It is aimed to make sure religious and secular contractors receive equal treatment when they compete for federal grants and contracts.

Several Obama-era regulations are reversed, including the one requiring faith-based healthcare and social service providers to refer clients to an alternative provider if clients have trouble with their religious affiliation. Another rule giving secular providers priority to make sure an explicitly religious provider isn’t the only federal contractor in an particular area is also removed.

“Religious liberty is a bedrock founding principle that this Administration consistently demonstrates its commitment to vigorously defend,” Education Secretary Betsy DeVos said Monday in a statement announcing the finalized rule.

“At the Department of Education, we’re continuing to ensure faith-based organizations, including faith-based institutions, do not give up their First Amendment rights as a condition of participating in taxpayer programs,” DeVos said, adding that her department will continue to ensure faith-based educational providers are “treated equally alongside their secular counterparts.”

“Under this Administration, religious discrimination in education is never tolerated,” she said.

Meanwhile, the finalized rule still preserves most of the existing regulations governing participation of religious organizations, including provisions barring providers from discriminating against beneficiaries based on religion, and requiring that any religious activities by the organization be separated in time or location from any services directly funded with federal money.

Rep. Bobby Scott (D-Va.), who chairs of the House Education and Labor Committee, called the new rule “harmful” because it may lead people to participate in religious activities in order to receive benefits in federally funded programs.

“Civil rights laws should protect those who are discriminated against, not those who are engaged in invidious discrimination,” Scott said in a statement. “Today’s announcement is a reflection of this administration’s misplaced priorities and distorted view of religious liberty.”

Rep. Virginia Foxx (R-N.C.), a ranking member on the committee, welcomed the rule, saying that it protects religious groups from discrimination.

“Too often religious organizations are targeted by leftist politicians and organizations who seek to strip them of their Constitutional rights,” said Foxx. “The Trump administration has worked diligently to push back against policies that would diminish the faith of any American.”