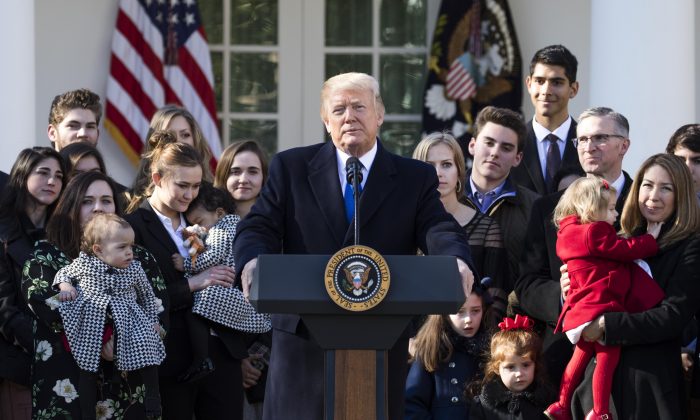 President Donald Trump addresses the March for Life rally, live from the Rose Garden at the White House on Jan. 19, 2018. (Samira Bouaou/The Epoch Times)
US News

WASHINGTON—On a sun-drenched afternoon in the White House Rose Garden, President Donald Trump voiced his support for the right-to-life movement with remarks delivered via satellite hookup to the 45th March for Life rally being held on the National Mall.

He described the right-to-life movement as “born out of love.”

The president linked his pro-life stance to America’s founding principles. “We will always defend the very first right in the Declaration of Independence,” he said. The Declaration famously says that “all men … are endowed by their Creator with certain unalienable Rights, that among these are Life, Liberty and the pursuit of Happiness.”

Trump’s remarks are a milestone for the pro-life movement. Previous presidents have addressed the March for Life rally via pre-recorded message or a phone call. With his Rose Garden speech broadcast to the rally attendees, Trump became part of the rally.

In doing so, Trump attracted media attention to the rally and march that in past years has been scarce, as major media felt they needed at least to cover the president’s remarks.

Maureen Filiault, a 56-year-old bookkeeper who had traveled from Massachusetts to take part, took note of the president’s involvement.  “You know just the fact that he is supporting the March for Life is an exciting thing for our country,” Filiault said.

Trump spoke surrounded by mothers holding their young children.  Among these were women who had considered abortion, but opted to choose to bear their children.

Jay Hobbs of Pregnancy Help News reports that four of these women were in Washington to tell Congress about the importance of pregnancy help centers, which help provide support for pregnant women.

Among these four, Trump singled out Marianne Donadio, who at the age of 17 had faced an unplanned pregnancy, which she carried to term with her parents’ support. Reflecting on what that support had meant to her, she then worked with members of her community to start a maternity home to care for homeless women who are pregnant.

Trump said this maternity home has given those it serves hope, and then expanded on this theme to speak about what the pro-life movement itself gives to the nation.

Shortly after being inaugurated, Trump reinstated the Mexico City Policy, a Reaganera rule that prohibits U.S. foreign aid from being used to fund abortions.

Trump said that because of the pro-life movement, “tens of thousands of Americans have been born and reached their full, God-given potential.”

Philip Frederick of Lebanon, Ohio, is a test technician for GE Aviation. He has been coming to the March for Life for at least 15 years, but still has “a little bit of guilt” for his attitudes as a young man. He supported abortion, “because I really was just interested in myself and my selfish needs and wants.”

Trump criticized the effect of the Roe v. Wade Supreme Court decision, which ended many states’ restrictions on abortion.

Trump noted that “Roe v. Wade resulted in some of the most permissive abortion laws anywhere in the world.” The United States, Trump said, is one of only seven countries to allow elective late-term abortions, along with China, North Korea, and others.

Roe v. Wade was decided on Jan. 22, 1973, and the first March for Life was born on Jan. 22, 1974, to oppose it. Every year since, the march and rally have been held around the anniversary of the Roe decision, despite the normally challenging weather. This year’s mild and sunny day was a welcome change.

On the mall, tens of thousands gathered, watching Trump’s live broadcast and listening to other speakers, including Speaker of the House Paul Ryan, before marching.

We will always defend the very first right in the Declaration of Independence.
— President Donald Trump

Lee Santos, 67, a ballroom dance instructor from Fort Valley, Virginia, thought Trump’s remarks were “beautiful, beautiful.” He noted the coincidence that the 45th president of the United States, Donald Trump, so publicly supported the 45th March for Life. He playfully hoped this coincidence was auspicious and heralded success for the pro-life movement.

One of those on the mall was Deacon Jose Correa of the Catholic Diocese of Springfield, Massachusetts, who came to the rally with a group of 22.

The 56-year-old said he has been coming for years, and said he will continue to come until the situation regarding abortion has changed.

He gave religious and moral reasons for opposing abortion.

“We are all children of God,” he said. “Only God gives life, and only God can take it away.”

He also said that in a country like the United States, which defends human rights, one has an obligation to defend the rights of the unborn.

Trump has taken several steps to support the pro-life cause. Shortly after being inaugurated, he reinstated the Mexico City Policy, a Reagan-era rule that prohibits U.S. foreign aid from being used to fund abortions.

He also cut off taxpayer funding for the U.N. Population Fund, which colludes with China’s state-run program of forced abortion and sterilization.

He has also expressed strong support for the Pain-Capable Unborn Child Protection Act, which would stop late-term abortions after 20 weeks of pregnancy, the point where an unborn child can experience pain, according to medical research. Passed by the House, that act awaits action by the Senate.

The Trump administration has issued guidance to enforce the requirement that taxpayer dollars do not support abortion coverage in Obamacare exchange plans.

Ashley Scrivener, a 34-year-old stay-at-home mom from Maryland, feels Trump’s administration has already been able to do a lot of good. She would like to see a push for pro-life legislation, the complete defunding of Planned Parenthood, more funding for pro-life organizations, and measures that support the culture of life and that “really uphold family traditional moral values.”

Of Trump himself, Scrivener said, “I pray that God works through him, and he’s able to bring about a lot of good in our country.”

Emel Akan and Samira Bouaou contributed to this report.