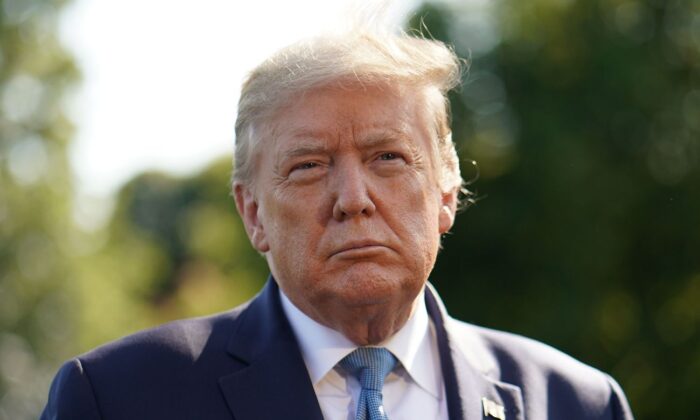 President Donald Trump arrives to speak to the press before departing from the South Lawn of the White House in Washington, on May 15, 2020. (Mandel Ngan/AFP via Getty Images)
Trump Administration

President Donald Trump accused Twitter of election interference after it added fact-checking labels on his Twitter posts for the first time on Tuesday. The Trump campaign also separately responded to Twitter’s move in a statement, accusing the platform of having a “clear political bias.”

“Twitter is now interfering in the 2020 Presidential Election,” Trump wrote late Tuesday on Twitter. “They are saying my statement on Mail-In Ballots, which will lead to massive corruption and fraud, is incorrect, based on fact-checking by Fake News CNN and the Amazon Washington Post.”

He added, “Twitter is completely stifling FREE SPEECH, and I, as President, will not allow it to happen!”

….Twitter is completely stifling FREE SPEECH, and I, as President, will not allow it to happen!

On Tuesday morning, the president posted on Twitter a message expressing concern about mail-in ballots, saying that such a practice, if widespread, would lead to fraud and a “rigged election.”

“There is NO WAY (ZERO!) that Mail-In Ballots will be anything less than substantially fraudulent,” Trump wrote on Twitter. “Mail boxes will be robbed, ballots will be forged & even illegally printed out & fraudulently signed.”

“The Governor of California is sending Ballots to millions of people, anyone living in the state, no matter who they are or how they got there, will get one,” Trump wrote.

“That will be followed up with professionals telling all of these people, many of whom have never even thought of voting before, how, and for whom, to vote,” the president speculated. “This will be a Rigged Election. No way!”

….living in the state, no matter who they are or how they got there, will get one. That will be followed up with professionals telling all of these people, many of whom have never even thought of voting before, how, and for whom, to vote. This will be a Rigged Election. No way!

Twitter later added warning labels to Trump’s post reading, “Get the facts about mail-in ballots.” The linked labels lead to a Twitter article with a headline that reads, “Trump makes unsubstantiated claim that mail-in ballots will lead to voter fraud.”

The message under the headline reads: “On Tuesday, President Trump made a series of claims about potential voter fraud after California Governor Gavin Newsom announced an effort to expand mail-in voting in California during the COVID-19 pandemic.

“These claims are unsubstantiated, according to CNN, Washington Post and others. Experts say mail-in ballots are very rarely linked to voter fraud.”

The article also includes three points under the title “what you need to know:”

The Twitter article compiled excerpts and links to articles from CNN, The Washington Post, The Hill, and other media outlets. The article also has a running list of other Twitter users’ posts that appear to disagree with the president’s message about mail-in ballots.

Trump 2020 Campaign Manager Brad Parscale said in a statement that Twitter has a “clear political bias.”

“We always knew that Silicon Valley would pull out all the stops to obstruct and interfere with President Trump getting his message through to voters,” Parscale said.

“Partnering with the biased fake news media ‘fact checkers’ is only a smoke screen Twitter is using to try to lend their obvious political tactics some false credibility. There are many reasons the Trump campaign pulled all our advertising from Twitter months ago, and their clear political bias is one of them.”

There are many reasons we pulled all our advertising from Twitter months ago, and clear political bias is one of them.https://t.co/oqgTq32KxS

In a statement to media outlets late Tuesday, Twitter said that Trump’s posts about mail-in voting “contain potentially misleading information about voting processes and have been labeled to provide additional context.” Twitter noted that the post does not violate Twitter’s rules because “it does not directly try to dissuade people from voting.”

Twitter also pointed to a new policy that said that it “may use these labels and warning messages to provide additional explanations or clarifications in situations where the risks of harm associated with a tweet are less severe but where people may still be confused or misled by the content.”

The social media platform has yet to respond to The Epoch Times’s request for comment.

California Gov. Gavin Newsom issued an executive order in early May to allow every registered voter in the state the ability to vote by mail for the Nov. 3 general election—becoming the first U.S. state to do so—in a move Newsom said would help ensure voter participation while reducing the spread of the CCP (Chinese Communist Party) virus, commonly known as the novel coronavirus.

Democrats contend that mail-in ballots are necessary to maintain voter turnout in November amid the CCP virus crisis. Republicans, including Trump, have reiterated that mail-in voting may be susceptible to fraud.

The Republican National Committee filed a lawsuit against Newsom on Sunday over the executive order.