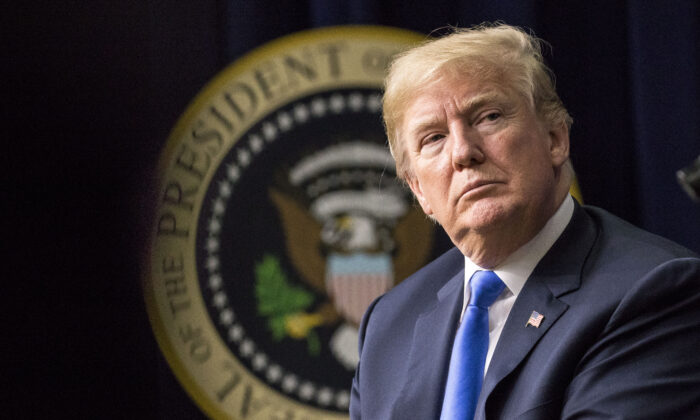 Trump: 35 House Republicans Who Voted for Jan. 6 Commission Are ‘Wayward,’ ‘Can’t Help Themselves’

In a statement on Thursday, the former president argued that while the GOP has superior policies to Democrats, the Democrats “stick together” and “Republicans don’t.”

Because of this, Trump said, Republicans in Congress are perceived by voters as “being ineffective and weak.”

Trump made reference to Sen. Ben Sasse (R-Neb.), Sen. Mitt Romney (R-Utah), and Rep. Liz Cheney (R-Wyo.), who was ousted from her House Republican Chair position during a vote last week. Sasse and Romney—both frequent critics of Trump—voted to convict Trump during his second impeachment trial, while Cheney voted to impeach him.

“This is the Grand Old Party, the party’s done so much for our country. And quite frankly, many Republicans have courageously withstood the—shall we say—the assault on our democracy that is going forth,” she told news outlets.

“When you think of the Republicans and you think courage that they’ve had in the electoral system in our country and election decisions that have been made to support the fact that the election was legitimate. Many Republicans were the ones who came forward,” she added.

Some of the Republicans who voted for the commission said that they wanted to make sure another Jan. 6-like incident doesn’t occur in the future.

“What happened that day must never happen again. I urge the Senate to pass the bipartisan 1/6 commission bill. Some things must be above politics,” said Cheney, who voted for the commission, in a statement.

“I want answers from Speaker Pelosi on the lack of adequate security in the U.S. Capitol during that day. More importantly, understanding the events of January 6th is critical so that the instances of heroism can be recognized, and the errors made will never be repeated,” Hill said in a statement.