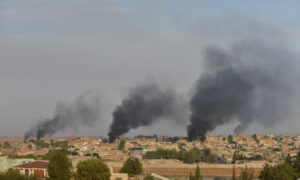 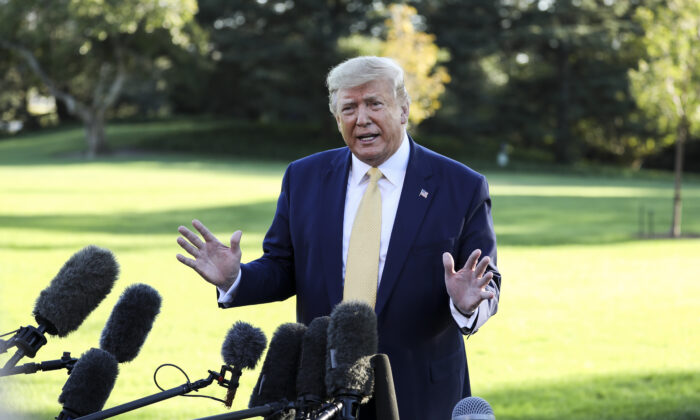 Trump: 1,000 US Troops Leaving Syria to Remain in the Region to Stop ISIS Revival

President Donald Trump late Monday said that about 1,000 U.S. troops slated to leave Syria will redeploy and remain in the region to help prevent the revival of the ISIS terrorist group.

Trump also said that he will impose sanctions on any Turkish officials—whether current or former—who are linked to Turkey’s actions in northern Syria. Trump had warned Turkey last week he would impose sanctions if Turkey did anything he considers “off limits.”

Trump to Impose Sanctions Against Turkey Officials for Incursion Into Syria

Trump had originally ordered to pull all remaining U.S. troops, numbering about 1,000, from northern Syria, a move confirmed by U.S. Defense Secretary Mark Esper on Sunday.

Esper told CBS News at the time that Turkey appeared to be fully ready to commit an incursion into northern Syria, saying it “should not be a surprise,” adding that, “If you go back in time to when we first began this relationship … with the Syrian Kurds at that time in 2014 the Turks were protesting at that moment.”

Esper said he was aware that the Kurdish-led Syrian Democratic Forces (SDF) were seeking help from Syria to defend itself from Turkish attacks in northern Syria.

“In the last 24 hours, we learned that [the Turks] likely intend to extend their attack further south than originally planned, and to the west,” Esper said Sunday. “We also have learned in the last 24 hours that the … [SDF] are looking to cut a deal, if you will, with the Syrians and the Russians to counterattack against the Turks in the north.”

It would be irresponsible to keep American soldiers in that position, Esper said, adding that Turkey went ahead with the incursion despite the United States telling them not to.

“We are doing what’s in the interest of our servicemembers not to put them in harm’s way,” he said on Sunday.

“In order to prevent and block this (Turkish) assault agreement has been reached with the Syrian government—whose duty is protect the borders of the country and to protect Syrian sovereignty—for the Syrian army to enter and deploy along the length of the Syrian-Turkish border,” a statement from SDF said on Sunday.

The move would also allow for the liberation of other Syrian cities occupied by the Turkish army such as Afrin, the statement said. The Turkish army and its Syrian rebel allies drove Kurdish forces from Afrin in 2018.

The move follows Trump’s surprise announcement last week on Oct. 7 to pull a group of U.S. forces from a section of the border, opening the path for Turkey’s incursion. Prior to the withdrawal, U.S. troops had been fighting alongside Kurdish-led forces against ISIS.

Turkish troops and their Syrian rebel allies launched its offensive against Kurdish militia in northeast Syria on Oct. 9, a move Trump called a “bad idea.”

Kurdish-led forces have established control over swathes of eastern and northern Syria since the country descended into civil war in 2011, setting up their own governments but always saying their aim was autonomy rather than independence.

Despite mutual enmity between these Kurdish groups and Syria, where the Baathist government systematically persecuted Syrian Kurds, the SDF has seldom clashed with the Syrian government during the war.

The sides have also at times appeared to coordinate military campaigns against shared enemies, notably the Turkey-backed rebels taking part in the offensive with the Turkish army.

Correction: A previous version of this article’s headline incorrectly noted where U.S. troops will be headed. About 1,000 U.S. troops slated to leave Syria will be redeployed and remain in the region to help prevent the revival of the ISIS terrorist group. The Epoch Times regrets the error.