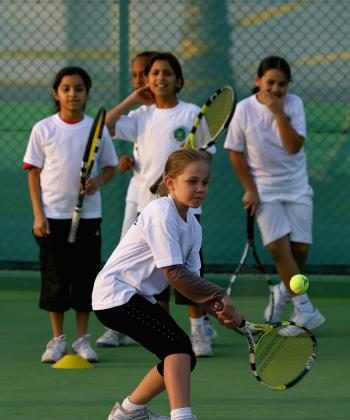 Children learning to play tennis. A recent report says more than 80 percent of Canadians believe that “promoting positive values in youth should be a priority for sport in Canada.” (Brunskill/Getty Images)
US

If you have ever cringed upon witnessing taunting, yelling, or other abuse at a community sports event or one of your own children’s games, you are not alone in wanting a more positive experience from sport.

A recent report by the Canadian Centre for Ethics in Sport (CCES) says more than 80 percent of Canadians believe that “promoting positive values in youth should be a priority for sport in Canada.”

One is Rachel Corbett, a parent as well as a sport consultant with the Centre for Sport and Law in St. Catharines, Ontario. All three of Ms. Corbett’s children are active in sports, and she says it has sometimes been painful to watch their games because of the way some parents and spectators behave.

While many parents may hesitate to speak up, Ms. Corbett said she is increasingly finding the confidence “to actually stand up to behaviours in sport that aren’t good.”

She credits this with having joined the True Sport Movement, a national movement that’s supported by the federal, provincial, and territorial sport ministers and endorsed by over 1,400 sports groups, schools, and communities across the country.

The CCES report, entitled “What Sport Can Do: The True Sport Report,” was done on behalf of the movement.

Emphasizing values like fairness, inclusion, and excellence, the movement sets out six principles for sport: go for it, play fair, respect others, keep it fun, stay healthy, and give back.

“If another parent or spectator is behaving in a way that I find offensive and that is contrary to the values of the True Sport Movement, I actually ask them to stop,” said Mrs. Corbett.

“I tell them I am a True Sport Champion and that I believe in these values and I believe that this experience should be positive for everybody, and your behaviour is working against that and I’d like to ask you to stop.”

The True Sport Report says that 92 percent of Canadians think community sport can be an enormous force for good and a highly positive influence, particularly for youth, but only 20 percent believe it is living up to its true potential.

“The reason has to do with the kinds of values that are seen all too often in community sport,” said CCES president Paul Melia.

Those values manifest in behaviours such as cheating, bullying, violence, parents and coaches screaming at officials, and coaches applying on children techniques from professional sport.

Mr. Melia noted that some of these values and behaviours creep in from professional sport, which is a commercial business focused on entertainment, celebrity status, money, and winning, sometimes at the expense of safety, fairness, respect, and hard work.

“This starts to undermine and diminish the positive impact of community sport,” he said.

More importantly, the report showed that “it wasn’t just any sport that could produce these benefits, it was good sport, values-based sport,” said Mr. Melia

“Communities also have to look at sport differently,” he said. He described sport as “a public asset that needs to be nurtured, protected, and invested in.”

Sport can and needs to be used intentionally to help address issues within the community, such as teen suicide, school dropout, or economic renewal, Mr. Melia said.

A growing number of clubs, teams, organizations, and municipalities are joining the movement, including the city of Regina. On Monday, Regina city council passed a motion proclaiming their city a “True Sport Community.”

Mayor Fiacco, along with Olympic god medalist Beckie Scott and CCES Chair Dr. Louise Walker, a former Olympian, have sent a letter to mayors across Canada with a copy of the True Sport Report.

“We are asking the leaders of our communities to harness the power of sport within their communities and join the True Sport Movement,” said Mayor Fiacco.

The letter suggests some steps that communities can take, such as ensuring equitable access to sport facilities and programs, especially for new Canadians, those on low income, and people with disabilities.

“If you have that type of a culture, newcomers to your community automatically are able to participate. There are no barriers there,” Mayor Fiacco said.

He welcomed the federal government’s recent announcement to make the Children’s Fitness Tax Credit refundable, as it lets even families that pay little or no income tax get benefit from the credit when they register their children in athletics.

The True Sport Report says that 28 percent of adults and about half of all children and youth in Canada actively participate in sport. Over 5.3 million Canadians volunteer as amateur sport coaches, officials, and organizers.

Ms. Corbett believes that “we can take deliberate steps to make our sport experiences in the community more positive.”