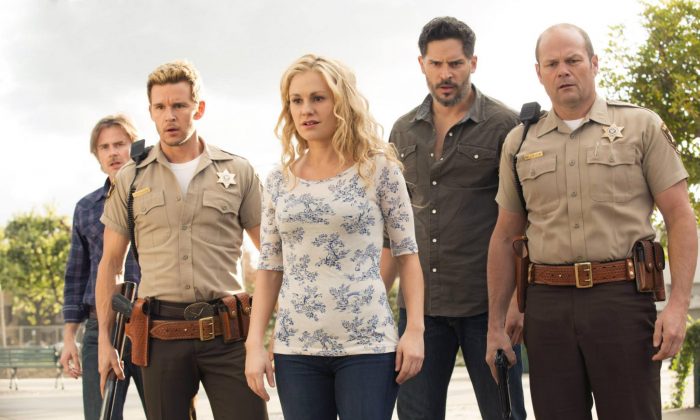 There’s been rumors recently that Alcide would be killed off.

Actor Joe Manganiello gave an interview with GQ about the prospect.

“I think it creates a sense of urgency and electricity to the season that anybody could go at any time,” he said. “No one is safe.”

“In the books they have Alcide Hervaux still alive, but the books and the show have not always been the same, and this season will prove that point on multiple occasions with one of the big things being Alcide being killed,” said a source to Hollywood Life.

“The show is going to be pretty crazy this season and there [are] going to be several significant deaths happening.”

“They have filmed stuff with Joe afterwards and have done multiple endings to that death scene,” the insider continued. “So many people in the cast and crew think he is still alive.”

Manganiello also talked about his character a bit.

“You mean my hair on my head? I’m not actually hairy, I have no body hair at all. I have hair on my head and face which I guess is where it counts. It differs depending on whether I have short or long hair. When it was longer, I used this really light wax in a tube by Paul Mitchell. And, when I have it short, I use Kevin Murphy’s Night Rider – I think that’s what it’s called, I don’t really fuss over it,” he said in the interview.