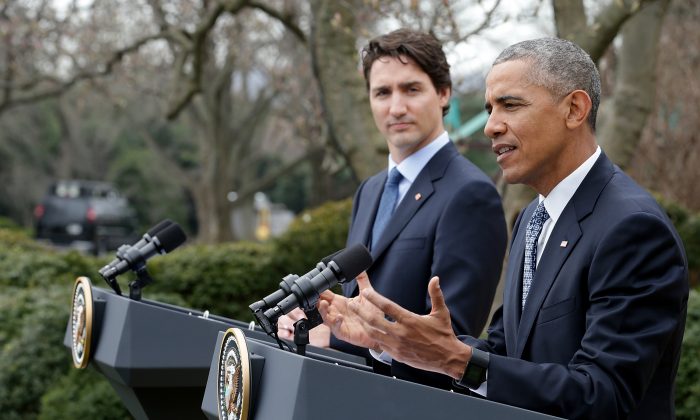 Young Lockinvar from out of the North!

The eagle (or at least The Justin) has landed!

In a Washington that is experiencing the first warmth of spring after a grim-for-D.C. winter, the arrival of Canadian Prime Minister Justin Trudeau was a welcome relief. It provided an opportunity for official Washington to divert itself for a day from the grim realities of a viciously fought political presidential campaign in which vituperation is the flavor of every day. And with the likelihood of President Obama accomplishing anything substantive during his remaining months as president more fleeting every day, he may also have enjoyed a “night off” from political cage fighting. A little pomp and circumstance is fun.

In their delight that ‘Justin’ enjoyed an official State Dinner, Canadians should not forget a blunt reality.

But in their delight that “Justin” enjoyed an official State Dinner, Canadians should not forget a blunt reality: Obama deliberately disrespected Prime Minister Harper during his years as Canada’s leader. During the period of Obama–Harper political overlap, state dinners were infrequent, but Obama hosted the Mexican president and Chinese leaders twice as well as French, German, British, and Japanese leaders. Never Stephen Harper.

On the other hand, no Canadian has addressed a joint session of Congress in almost 28 years (Brian Mulroney in April 1988). Overdue, eh?

Thus the rush to invite PM Trudeau to a state dinner immediately after his victory was less a congratulatory act than a final message of contempt/slap in the face for PM Harper.

Although mutual antipathy wasn’t fated between President Obama and PM Harper, the historical reality has been that the “fit” between liberal U.S. leadership and conservative Canadian leadership has always been worse than when “conservatives” or “liberals” head both countries. And the differences need not be policy-driven.

Indeed, Harper’s foreign policy strongly supported ostensible U.S. public positions in Libya, Ukraine, Iraq–Syria (with fighter bombers and boots on the ground), and Iran (flat opposition to an Iranian nuclear weapons program). Unfortunately, many of Obama’s positions in these areas were closer to lip service than real service and, perhaps unknowingly, Harper was out of step with Obama. Harper’s “all in” support for Israel wasn’t a winner in Washington either.

But it was a key domestic issue that generated toxic differences. Recalling the then realities, Harper declared in 2011 that proposed construction of the Keystone Pipeline was a “no brainer” so far as official U.S. approval was concerned. Throughout the agonizing/tantalizing effort to secure approval, Harper “didn’t get the word” and instead doubled-down by declaring that he “wouldn’t take no for an answer.” Ultimately, Obama said “No” with a Trudeau salute.

And while Trudeau supports pipelines, one can be sure they were not a significant agenda item at their bilateral meetings.

It took abstract observers too long to conclude that Obama was more interested in fighting “global warming” than global terrorism.

But in this style, Trudeau’s policies are more congruent with Obama’s. Canadian withdrawal of CF-18s from the Iraq/Syria anti-Daesh fight is irrelevant. Trudeau’s implicit cancellation of Canada’s F-35 purchase isn’t important. His skeptical attitude toward “kinetic” military action telegraphs a return to Canadian-as-Peacekeeper, but Obama’s interest in the military is peripheral at best.

While Obama excoriated British PM Cameron as a freeloader for not spending 2 percent of GNP on defense, he said nothing about Canada’s 1 percent defense GNP spending. But where they tightly coincide on the soul-mate level is environmental protection, “global warming,” and promotion of alternative energy directed at eliminating carbon-based fuels.

There are a variety of vague “take aways” from this bilateral visit: greater cooperation in methane reduction, enhanced protection for the Arctic, more attention to “beyond the border” efforts to ease border security constraints, etc. They qualify as BOMFOG (brotherhood of man/fatherhood of God) proposals. As is invariably the reality, the devil-in-the-details wrangling will preclude rapid, comprehensive agreement.

Hopefully, Trudeau will be careful not to overplay his hand in the post-coital period following the Official Dinner. He already came close, indeed over the line, to interfering in U.S. politics with his comments on “60 Minutes” suggesting Americans should pay more attention to foreign affairs, implicitly critical of Donald Trump.

Trudeau projects a touch of know-it-all arrogance with a snicker at current U.S. political and social flailing, reflecting his majority parliamentary control and ability to work his will on Canada for the next five years.

But, one also notes the comment by a senior Canadian at a pre-dinner Washington policy conference: “This is the last time Obama will pay attention to Canada for six months, if at all.”