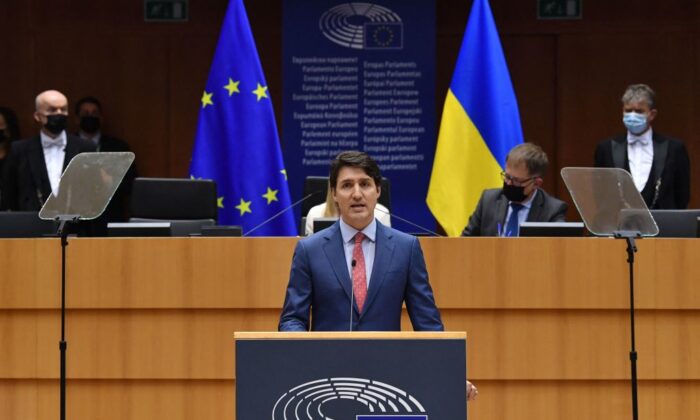 Canada's Prime Minister Justin Trudeau talks during a plenary session of the European Parliament at the EU headquarters in Brussels, on March 23, 2022. (John Thys/AFP via Getty Images)
Canada

“We could see that something was lurking off on the horizon, something shadowy, something that was threatening. We didn’t look close enough,” Trudeau said as he recalled the last time he addressed the EU in 2017.

“When I spoke to this Parliament five years ago, I spoke about making multilateralism work for the middle class and those working hard to join it, so that economic frustrations don’t become fertile ground for populism, nativism, protectionism, and the polarization towards more extreme political views. Well today, we are staring these forces in the face as they threaten the peace, justice, truth, democracy, and stability of our world.”

In giving examples of what he sees in a changing world dynamic, Trudeau alluded to former U.S. President Donald Trump’s approach to multilateralism. He also mentioned Russian President Vladimir Putin and the Freedom Convoy movement that was demanding the lifting of COVID-19 restrictions and was suppressed by Trudeau invoking the Emergencies Act on Feb. 14.

Alluding to Trump and the United States, Trudeau said, “We saw one of our staunchest guarantors of the rules-based order choosing for four years to step away from NATO, away from multilateralism.”

“And now, Putin’s criminal invasion of a sovereign, independent, democratic Ukraine. People have a real and deep sense of uncertainty about what the future holds. These are anxious times and people are looking for leadership and solutions. Unfortunately, we’re seeing a rise in cynical populists who are trying to exploit these anxieties,” he said.

Trudeau then shifted to the domestic issue of the Freedom Convoy, calling it “anti-vaccine and anti-government protests.”

“Leaders of those convoys were effective in turning citizens with real anxieties against the system best suited to allay those concerns,” Trudeau said.

Trudeau said the international rules-based order was “established and bolstered” to provide people “the best prospects for peace, to defend their dignity, and their inalienable rights, and in order to make sure that they be free to choose their own future.”

This is now being threatened by Putin with his invasion of Ukraine, Trudeau said, who thought “democracy was weak.”

“But what he has never understood is that the rigours of debate, that forceful civic engagement is what makes us strong, and that democracy at its best will always be stronger than authoritarianism.”

Applause and Rebuke From MEPs

Trudeau’s speech received support from the Members of European Parliament (MEP) in attendance by way of applause and subsequent speeches.

Romanian MEP Siegfried Muresan, in the EP’s European People’s Party group and the Romanian centre-right National Liberal Party, thanked Canada for its contribution during the World Wars. “And today Prime Minister, You came again to Europe to defend a European country. And for this we all in Europe, and all of us in the free world say thank you.”

Danish MEP Nikolaj Villumsen from the EP’s Left group and the Danish Enhedslisten left-wing party, welcomed Trudeau to Brussels, and said “it is dark times as you have rightly said.”

Villumsen focused his intervention on the plight of Ukrainian refugees and said, “That is why I’m happy to hear that Canada will take an unlimited number of refugees.”

Four MEPs who spoke were more critical of Trudeau.

Two German MEPs from the EP’s Identity and Democracy group and the conservative Alternative for Germany (AfD) party said Trudeau should not have been allowed to address the Parliament due to what they said are his human rights violations against Freedom Convoy participants.

“A Prime Minister, who openly admires the Chinese ‘basic dictatorship,’ who tramples on fundamental rights by persecuting and criminalizing his own citizens as terrorists, just because they dared to stand up to his perverted concept of democracy, should not be allowed to speak in this house at all,” said German MEP Christine Anderson.

Fellow German MEP Bernhard Zimniok said Trudeau has been “trampling on democratic rights” and “cracking down on people who protested against disproportionate [COVID-19] measures.”

“Clearly the values of democracy are being despised by this individual—let us not give someone like this any speaking time in this house of democracy,” he said.

Kolakusic said millions of people around the world have sacrificed their lives for freedom, including “the right to choose, the right to life, the right to health, the right to work.” But, he said, “there are those among us who trample these fundamental values.”

“Canada, once a symbol of the modern world, has become a symbol of civil rights violations under your quasi-liberal boot in recent months,” he said, addressing Trudeau.

Referencing police action to clear the Ottawa protest and the freezing of bank accounts of protesters, Kolakusic added: “To you [Trudeau], these may be liberal methods, for many citizens of the world, it is a dictatorship of the worst kind.”

Another MEP chose to not attend Trudeau’s speech in protest, and wrote a letter explaining his rationale, focusing on Trudeau’s action to suppress the protest movement, but also accused him and other world leaders of abandoning true western values in favour of a worldview he called “neo-Marxist tyranny pretending to be progressivism.”

“These imposter leaders of today’s west have brought the world into the chaos we find ourselves today, precisely because they have strayed from the values that made the ‘west’ a free and prosperous world,” wrote Romanian MEP Cristian Terhes from EP’s European Conservatives and Reformists Group and the centre-right Christian Democratic National Peasants’ Party.

“Between the Russian imperialist tyranny, promoted by Putin, and the neo-Marxist tyranny pretending to be progressivism promoted by the likes of Trudeau, in which people are deprived of their rights and freedoms, becoming objects of the state, I do not choose any,” Terhes said, adding he favours the conservative values “we have received from God” of national sovereignty, individual liberty, and respect for human rights.