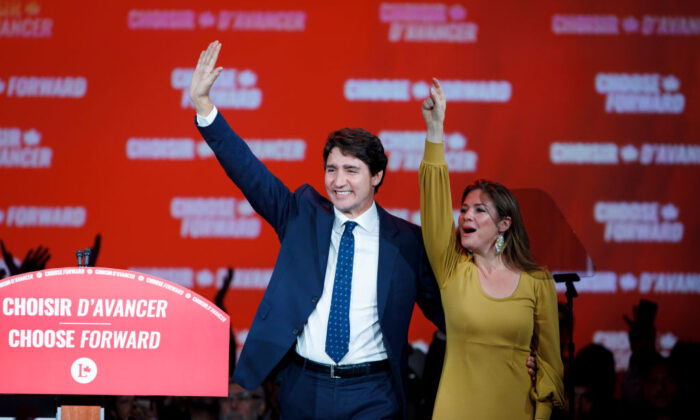 Governing Liberals now need the support of smaller parties to govern, likely have to give concessions to keep passing legislation
By Omid Ghoreishi

TORONTO—Canadian Prime Minister Justin Trudeau hung on to power in the nation’s Oct. 21 election, but faces a tougher task of passing key legislation and remaining in power with a minority government.

Trudeau’s Liberal Party won 157 seats of the Parliament’s 338 seats, 13 shy of the count required to maintain a majority. The party now has to get the support of smaller parties to pass legislation and maintain the confidence of the Parliament.

Before the election, the left-leaning New Democratic Party (NDP) had indicated that it’s willing to join the Liberals to form a coalition government, insisting that it wants to stand up to the Conservative Party.

Trudeau is also faced with a more divided nation, as the Quebec separatist party Bloc Quebecois more than tripled its seat count in the election, and energy-rich provinces of Alberta and Saskatchewan overwhelmingly voted for the Conservatives. Frustration in the Western provinces has been on the rise over sentiments of being neglected by Ottawa and a lack of progress on building pipelines to get their resources to more markets.

“[Albertans] elected Conservatives with 70 percent of the vote, the largest democratic mandate in our history,” Alberta Premier Jason Kenney wrote on Twitter.

“The path our federal government has been on the last four years has divided our nation,” Saskatchewan Premier Scott Moe wrote in an email to Trudeau. He asked that Trudeau cancel the federal carbon tax, renegotiate the equalization formula that transfers funds from have-provinces such as Alberta and Saskatchewan to have-not provinces, and help build pipelines.

For his part, Trudeau struck a conciliatory tone in his post-victory speech, saying, “To those who did not vote for us, know that we will work every single day for you, we will govern for everyone.”

Trudeau’s liberal image took a severe blow when photos and a video were revealed during the election campaign of him donning blackface.

He has also been marred for his role in trying to help Montreal engineering giant SNC-Lavalin avoid criminal prosecution for its alleged bribing of Libyan officials. A report by the parliamentary ethics commissioner earlier this year concluded that Trudeau engaged in “flagrant attempts to influence” his then-attorney general, Jody Wilson-Raybould, to find a solution so the company could avoid prosecution, adding that the prime minister had cited “partisan political interest” when attempting to interfere in the matter.

U.S. President Donald Trump congratulated Trudeau on his victory, saying on Twitter: “I look forward to working with you toward the betterment of both of our countries!”

Trump’s relations with Trudeau have improved since the 2018 G-7 summit hosted in Canada, where Trump called Trudeau “dishonest” and “weak,” while aboard Air Force One on his way to a denuclearization meeting with North Korean leader Kim Jong Un. Trump’s comments were in response to a news conference by Trudeau, where he said he wouldn’t let Canada be “pushed around” by the United States, which had slapped tariffs on Canadian steel and aluminum at the time.

Trump’s economic adviser Larry Kudlow later said Trump saw Trudeau’s remarks as trying to weaken his hand before his meeting with the North Korean dictator, saying that “Kim must not see American weakness.”