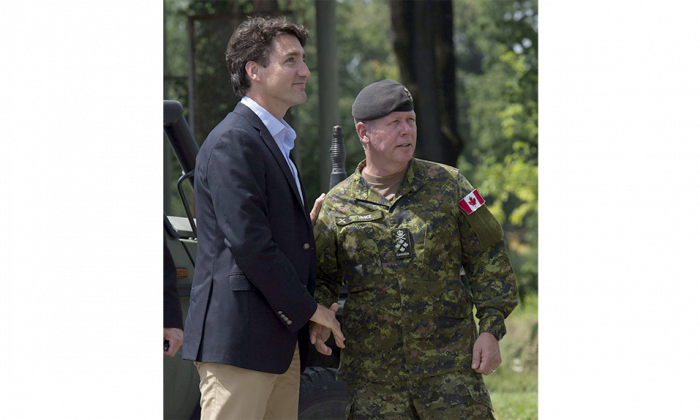 LVIV, Ukraine—A show of force capped Justin Trudeau’s six-day swing through eastern Europe on July 12, underlining the risks and challenges Canada faces in an increasingly volatile and politically important part of the world.

The prime minister flew into Lviv in western Ukraine before driving to a nearby military base for a first-hand look at the work of 200 Canadian soldiers who have been training the Ukrainian army since last summer.

From a distance, Trudeau, his son Xavier, and defence chief Gen. Jonathan Vance watched through binoculars as a Soviet-era armoured personnel carrier led a group of Canadian and Ukrainian soldiers toward a wooden building. The air shook as the vehicle’s cannon fired several bursts in quick succession.

The troops then moved away from the vehicle and spread out in a line facing the building. Four Canadians followed close behind as the eight Ukrainians slowly closed in on the building while firing their rifles before placing an explosive inside and setting it off.

The exercise was the type of attack those Ukrainian soldiers could soon be conducting on their own in the east of their country, where the army has been fighting Russian-backed separatists for more than two years. Nearly 9,500 people have been killed in the conflict, including civilians. Thousands more have been wounded.

We need to continue to work with those who are fighting for democracy and their territorial integrity.
— Prime Minister Justin Trudeau

Earlier in the day, Trudeau spoke to the soldiers—members of the Valcartier-based Royal 22e Regiment, or Van Doos—about Canada’s role in helping Ukraine in its struggle with Russia, as well as other countries that find their democracies or territory under siege.

“It has been a long time since Canada had to defend our valour and defend our territory,” Trudeau said in French.

“But we need to continue to work with those who are fighting for democracy and their territorial integrity. It is essential.”

The unanswered question, however, remains just how far Trudeau’s Liberal government—which has declared its commitment to peacekeeping efforts and re-engaging with Russia—is prepared to go when such a fight looms.
Trudeau’s comments in Lviv, as well as remarks he made July 11 in the Ukrainian capital, Kyiv, suggested a shift in tone, albeit a slight one.

He called Russia’s recent actions in the region “illegitimate” and “illegal,” and voiced strong support for NATO members in eastern Europe as well as Ukraine, despite rampant corruption in Ukraine and its failure to implement parts of a peace deal with Russia and the rebels.

The message may well have been aimed at the 1.2 million Canadians of Ukrainian descent, including the sizable Ukrainian-Canadian delegation that accompanied him in Kyiv and Lviv.

But during emotional visits to the Auschwitz-Birkenau concentration camp and several memorials in Kyiv for those killed in mass atrocities, he also bore first-hand witness to the devastation and tragedy that can result when authoritarianism and intolerance runs unchecked.

Early in the trip, Trudeau announced Canada would be one of four countries leading NATO battle groups in the Baltics and Poland—a direct response to Russia’s actions in Ukraine, meant to dissuade it from trying to destabilize other parts of eastern Europe.

But despite a personal request from Ukrainian President Petro Poroshenko, Trudeau wouldn’t commit to extending the training mission, which is due to end next March.

And while Trudeau said the Liberal government was “extremely enthusiastic” about leading NATO’s multinational force in Latvia, the decision was announced only after U.S. President Barack Obama and NATO Secretary General Jen Stoltenberg placed very public pressure on Canada to step up.

If the Ukraine mission isn’t extended, the actual number of Canadian troops in eastern Europe might see only a small bump in the next year. Canada has had 200 soldiers in Poland since 2014, but officials say that mission will end at the same time the effort in Latvia begins ramping up.

Defence Minister Harjit Sajjan and Foreign Affairs Stephane Dion maintain, meanwhile, that the government is committed to signing up for a peacekeeping mission.

There are fears NATO and Russia are on the brink of a new Cold War, if they aren’t in one already. The fact Canadian troops being sent to Latvia will be there for the foreseeable future will likely add to those comparisons.

But when it comes to the effort in Ukraine, there’s more at stake for Canada and the world than the relations between two friendly countries, Trudeau noted during the last public remarks of his visit.