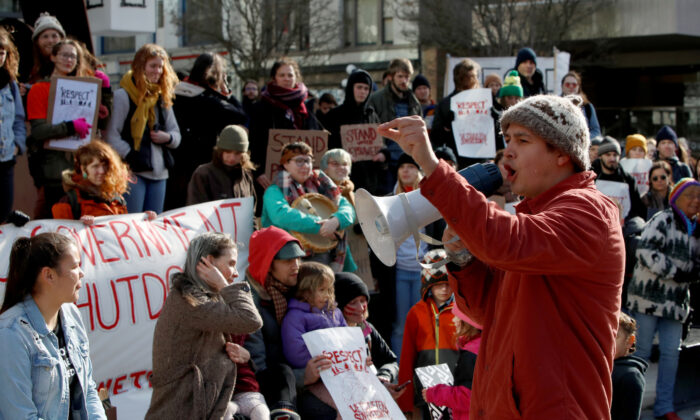 Protestor Saul Brown speaks to other demonstrators outside the Business Development Bank of Canada at 1515 Douglas Street as part of a protest against the Coastal GasLink pipeline, in Victoria on Feb. 14, 2020. (Kevin Light/Reuters)
Canada

OTTAWA—Prime Minister Justin Trudeau promised to redouble reconciliation efforts with Indigenous Peoples on Feb. 18, as he sought to ease tensions over nationwide blockades erected in opposition to a British Columbia pipeline project.

Even as Trudeau called for patience, questions abounded over how he planned to make good on his promise. He faced demands from the Opposition Conservatives to crack down on protesters who have disrupted large parts of the country’s transportation network.

Several First Nations leaders agreed in their own news conference in Ottawa that the dispute speaks to broader—and long−standing—concerns from Indigenous communities, but they also appeared uncertain over how the current crisis can be truly resolved.

Trudeau delivered his most extensive remarks yet on the blockades and the $6.6−billion natural−gas pipeline protesters oppose in an address to the House of Commons, where MPs were preparing to hold an emergency debate on the standoff.

“What we are facing was not created overnight,” Trudeau said. “It was not created because we have embarked upon a path of reconciliation recently in our history. It is because for too long in our history, for too many years, we failed to do so. Therefore, finding a solution will not be simple.”

Trudeau said many Indigenous people feel betrayed by the federal government after decades of empty promises, as he added that Canadians across the country are suffering because of the blockades.

Canadian Manufacturers and Exporters CEO Dennis Darby, for instance, said the crisis is “beyond serious” and estimated some $425 million in goods is becoming stranded every day the blockade continues.

It was in this context that Trudeau called for trust and patience from all sides to resolve not only the current crisis, but to also work on reconciliation to ensure similar disputes don’t erupt.

“The opportunity is there on the table right now,” he said. “We are in this together: the worker, the senior, the Indigenous leader, the protester, and the police officer. Let us have the courage to take this opportunity and take action together and so to build a better path for all Canadians.”

How Trudeau and his Liberal government might take that opportunity wasn’t apparent.

Bloc Quebecois Leader Yves−Francois Blanchet compared the prime minister’s speech to the promises Trudeau made to Indigenous people during the 2015 federal election campaign.

Trudeau noted the federal government’s offer to have Crown−Indigenous Relations Minister Carolyn Bennett meet with hereditary chiefs of the Wet’suwet’en First Nation, whose opposition to the Coastal GasLink pipeline crossing their land sparked the current crisis.

However, a hereditary chief said Tuesday afternoon they won’t meet until the RCMP leave the area where they arrested 28 people this month while enforcing an injunction.

The RCMP have operated a mobile detachment off a logging road outside Houston, B.C., since January 2019, after they enforced a similar injunction in the area.

While the RCMP have said their major operations in the region this month have concluded, they’ve also said the mobile unit will remain in place and continue “patrols of the corridor to ensure everyone’s safety.”

Conservative Leader Andrew Scheer pointed out that Trudeau’s address didn’t include a plan to end the blockades that have halted train service to parts of the country for more than a week and temporarily closed bridges and highways.

Describing Trudeau’s speech as “the weakest response to a national crisis in Canadian history,” Scheer blasted the protesters as “radical activists” and demanded immediate action to end the blockades, which he said were holding “our economy hostage.”

The Conservative leader suggested many of the protesters have little connection to First Nations and are opposed to all oil and gas pipelines.

“The prime minister’s elevation of these protesters to the same level as the thousands of men and women in First Nations communities across our country who have in good faith been trying to right the wrongs of Canadian history does a disservice to the spirit of reconciliation,” he said.

Saskatchewan Premier Scott Moe, who has been critical of Trudeau’s response to the blockades, tweeted he’s convened a conference call Wednesday of premiers as Chair of the Council of the Federation due to what he called “a lack of federal leadership in addressing this ongoing illegal activity.”

There was no immediate word on which premiers would be taking part.

Scheer, whom Trudeau later barred from a meeting he called with NDP Leader Jagmeet Singh, Bloc Quebecois Leader Blanchet, and Green Party Leader Elizabeth May, suggested most people in the Wet’suwet’en First Nation support the project, pointing to TC Energy as having signed an agreement for its Coastal GasLink pipeline with 20 elected band councils, including the Wet’suwet’en band council.

By Lee Berthiaume, The Canadian Press