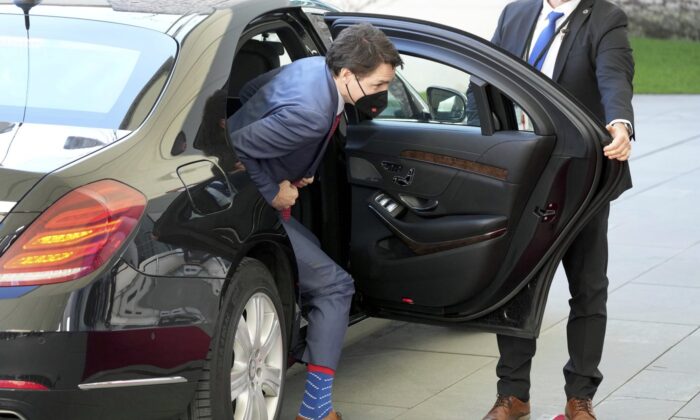 Canadian Prime Minister Justin Trudeau leves his car as he arrives for a meeting with German Chancellor Olaf Scholz at the chancellery in Berlin, Germany, March 9, 2022. (AP/Michael Sohn)
Canada

Poland’s prime minister told Justin Trudeau that they were meeting at a turning point in history as the Canadian prime minister was about to come face to face with Europe’s refugee crisis.

Trudeau arrived in Poland, where most of the estimated two million Ukrainians that have fled the Russian war on their country have sought sanctuary.

“We meet at a turning point, which will probably determine and define the future for years or maybe decades,” Prime Minister Mateusz Morawiecki told Trudeau shortly after his arrival in Warsaw.

“The war and refugee crisis which it created, but in particular, in what’s going on in Ukraine, it’s something unimaginable in the third decade of 21st century.”

Morawiecki said he planned to talk to Trudeau about “how to get rid of Russian oil and gas, how to make the sanctions work really effectively.”

Trudeau praised Poland for its “extraordinary” welcome of Ukrainians fleeing for their lives, and he told his host how impressed he was with the Polish soldiers he met earlier this week at the NATO base in Latvia, where Canada is commanding a multinational battlegroup.

“The sanctions are hard and heavy and will last a very long time,” said Trudeau.

Later Thursday, Trudeau was to visit a temporary shelter for refugees as part of his day in Warsaw. Hundreds of thousands of Ukrainian children are among those who have escaped to neighbouring Poland in the face of an escalating Russian bombardment that has targeted civilians.

The United Nations says more than 500 civilians have been killed so far. On Wednesday, it was the images of women and children who survived the bombing of a maternity hospital in Ukraine that filled European airwaves and put a human face on that suffering for a continent reeling from the worst fighting since the Second World War.

The airstrike on the maternity hospital in the port city of Mariupol injured pregnant women and left children buried in the rubble.

The World Health Organization says it has confirmed 18 attacks on medical facilities since Russia invaded Ukraine two weeks ago.

Before leaving Berlin, Trudeau gave a major foreign policy speech at a leading German think tank and answered questions from an international audience where he said he believed Russian President Vladimir Putin would be held accountable one day for war crimes before the International Criminal Court.

Trudeau affirmed that while Canada’s doors are wide open to Ukrainian asylum seekers, their first stop will be somewhere in Europe.

“Canada is a country that was built by people fleeing war, persecution or just looking to build a better life,” he said.

Danny Glenwright, the president of Save the Children Canada, said there is grave concern for the more than one million children who have fled Ukraine so far.

“We are particularly worried about the risk of displacement and subsequent soaring humanitarian needs, based on reports that hundreds of thousands of people, mainly children and women, will continue to arrive in Poland, Romania, and other neighbouring countries.”

He said his organization has teams in Poland and nearby countries to help refugees, and is advocating with European Union officials and others to help children reach safety and be protected.

Joly said Canada is working closely with the United Nations High Commissioner for Refugees throughout eastern Europe to find ways to get refugees to Canada after negotiating safe passage agreements. She said International Development Minister Harjit Sajjan was in Moldova talking to the UN refugee agency to co-ordinate Canada’s response.

“These conversations are happening,” Joly said. “But at the same time, we need to do things well.”

Freeland, who is of Ukrainian descent, said when she sees the images of the carnage coming out of Ukraine, “I have to stop looking at them.” She called the maternity hospital bombing an “atrocity,” using the same word as Ukrainian President Volodymyr Zelenskyy.

After speaking to two members of Zelenskyy’s cabinet on Wednesday, Freeland again praised the courage and resilience of Ukrainians as they fight off the Russian onslaught. Zelenskyy has repeatedly called for NATO a no-fly zone to protect his country, but Canada and its allies have ruled that out because they say it would lead to wider war between the West and Russia.

But she also addressed the one hard truth underlying the fact that decision.

“The reality is, when it comes to the actual fighting, the Ukrainians are fighting alone. They’re fighting for all of us,” Freeland said.

In Warsaw, Trudeau is to meet with Poland’s prime minister and president and is expected to meet with U.S. Vice-President Kamala Harris to discuss the situation in Ukraine.

It will be Trudeau’s final stop on his four-country tour of Europe this week to speak with allies about how to ramp up the pressure on Putin’s regime.

He met Wednesday with German Chancellor Olaf Scholz and their talks focused on the need for an immediate ceasefire in Ukraine and a desire to end the war without further escalation.

Trudeau also announced Wednesday that Canada would send another $50 million in specialized equipment, including Canadian-made cameras for surveillance drones, to help Ukraine defend itself.