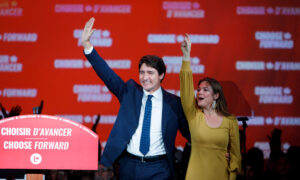 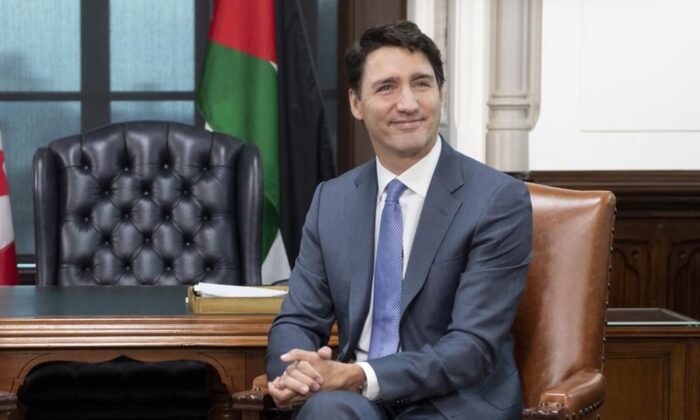 Canadian Prime Minister Justin Trudeau is photographed in Ottawa on Nov. 18, 2019. He will be all business on the afternoon of Nov. 20 when unveiling a cabinet to navigate a new era of minority government in a bitterly divided country. (The Canadian Press/Adrian Wyld)
Canada

OTTAWA—Justin Trudeau will unveil a cabinet to navigate a new era of minority government in a bitterly divided country on the afternoon of Nov. 20.

Forget the theatricality and sunny optimism of 2015. Adoring crowds thronged the grounds of Rideau Hall, cheering as the new Liberal prime minister and his gender−equal team of fresh−faced ministers paraded triumphantly up the curving drive to the governor general’s residence, serenaded by bagpipes.

This time, there’s been no open invitation to the public to attend the official launch of Trudeau’s second mandate and watch on large screen TVs set up on the grounds of Rideau Hall as ministers take their oaths of office.

Ministers will arrive individually for the ceremony and make themselves available briefly afterwards to speak with reporters—the traditional, relatively low−key way cabinet shuffles are conducted.

The more sober approach is a reflection of the sobering circumstances in which the governing party finds itself, reduced to a minority of seats in the House of Commons. It survived a bruising campaign that diminished Trudeau’s stature as a champion of diversity amid long−ago photos of him posing in blackface and left the Liberals shut out entirely in Alberta and Saskatchewan, where talk of western separatism has gotten louder since the Oct. 21 vote.

Trudeau has taken a full month since winning re−election to put together his new cabinet, twice as long as he took in 2015.

Like cabinets during his first mandate, this one will have an equal number of men and women and will attempt to balance various regional, ethnic, and religious considerations.

Most, if not all, existing ministers are expected to remain in cabinet but, with the exception of at least Finance Minister Bill Morneau, many will move to new portfolios.

Freeland, who has roots in Alberta although she represents a downtown Toronto riding, is widely expected to take on a pivotal role in bridging the divide between the federal Liberal government and irate conservative−led provinces, including Ontario and in the West, as deputy prime minister and minister in charge of a beefed−up intergovernmental affairs department, to be renamed domestic affairs.

Sources, who spoke on condition of anonymity because they were not authorized to speak publicly about the highly confidential cabinet selection process, say Francois−Philippe Champagne will leave his current post at Infrastructure to take over from Freeland at Foreign Affairs.

Liberal insiders expect a larger roster than the current 34, with at least two newly elected MPs vaulted straight into cabinet and at least another two re−elected backbenchers elevated.

Apart from Freeland’s new role, insiders expect the most important portfolios to be filled will be Finance, Natural Resources, and Environment, reflecting the Liberals’ priority of transitioning Canada off its heavy reliance on fossil fuels without deep−sixing the economy and further infuriating people in Canada’s oil−and−gas heartland, Alberta and Saskatchewan.

Jonathan Wilkinson, currently fisheries minister, will move to Environment, according to sources. He’ll be tasked with squaring the circle of satisfying the majority of Canadians who voted for parties that support stronger action on climate change and simultaneously satisfying the majority who voted for parties that support expansion of the Trans Mountain pipeline to take Alberta oilsands crude to the B.C. coast for export overseas.

Although he represents a British Columbia riding, Wilkinson was born and raised in Saskatchewan, where he once worked for Roy Romanow’s NDP government. His Saskatchewan roots might help him address anger in that province over the federal Liberals’ climate policies.

Trudeau’s choice of government House leader will be equally important given the minority situation. He is expected to tap Montreal MP Pablo Rodriguez for the crucial task of ensuring that government legislation passes with the support of at least one opposition party.

Newcomer Steven Guilbeault, a prominent Quebec environmentalist, is expected to take over from Rodriguez at Canadian Heritage.