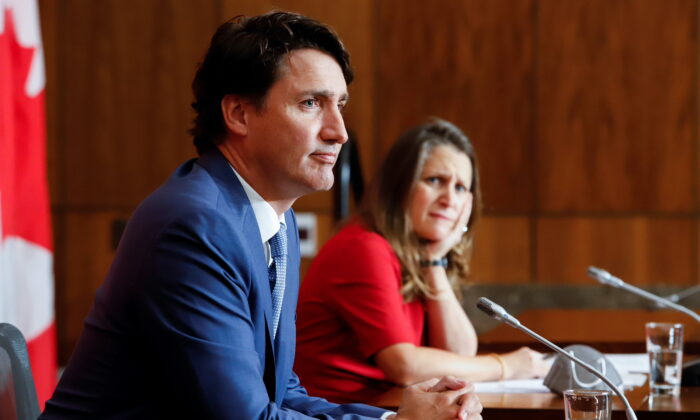 Deputy Prime Minister and Minister of Finance Chrystia Freeland and Prime Minister Justin Trudeau listen to a question at a news conference in Ottawa on Oct. 6, 2021. (Patrick Doyle/Reuters)
Canada

In his letter, issued on Dec. 16, Trudeau says Canadians gave his party the mandate “to take bold, concrete action to build a healthier, more resilient future,” with the use of “science and evidence-based decision-making.”

Freeland’s mandate includes a number of objectives in line with the progressive vision of the Liberal government, including priorities to combat the “existential threat” of climate change and the “systemic inequities” in the “core fabric of our society.”

With the unprecedented pandemic spending that pushed Canada’s debt over $1 trillion with a $354 billion deficit in 2020/2021, the government will look to increase its revenues by raising taxes on big businesses and top earners.

To boost economic recovery, Trudeau wants Freeland to make “all Canadians and businesses contribute their fair share,” by raising taxes on big banks and insurance companies and having them pay an additional temporary “Canada Recovery Dividend.”

To recover additional money out of federally regulated entities such as banks and insurance companies, Trudeau is asking Freeland to modernize the “general anti-avoidance rule regime,” which allows corporations to reduce their taxation.

Top earners would not be spared either, with a requested new tax on luxury cars, boats, and planes, as well as the establishment of a minimum 15 percent tax rule for individuals in the top bracket.

Freeland was also directed to invest in the Canada Revenue Agency to “close the tax gap and combat aggressive tax planning and avoidance.”

She is also asked to establish a new “Futures Fund” for Alberta, Saskatchewan, and Newfoundland and Labrador with the minister of International, Export Promotion, Small Business and Economic Development. This would be to support economic diversification in the shift away from the extraction of hydrocarbons in the attempt to reach net-zero emissions by no later than 2050.

While the word “inflation” is not mentioned in the mandate letter, some measures regarding affordability are introduced in the field of housing.

Among the cited measures is providing support to the minister of housing in “making critical investments and priority policy decisions to expand Canada’s housing supply” to bring down the cost of housing.

Another measure to be pursued by Freeland and Minister of Housing Ahmed Hussen is preventing “renovictions” by requiring landlords to disclose the rent they charged before and after renovations and to pay a proportional surtax if the increase is excessive.

House flipping is targeted as well with the creation of an anti-flipping tax requiring properties to be held for at least 12 months.

First-time homebuyers could expect to be supported by tax credits and other measures such as having banks create tax-free first home savings accounts.

Measures are also introduced to de-incentivize foreign real estate speculators by introducing taxes on non-resident owners whose properties are vacant or underused, and also banning foreign investment capital in non-recreational residential properties in the next two years.

Trudeau also wants Freeland to pursue a number of tax credits, such as for small businesses to invest in better ventilation, a mobility credit of up to $600 for construction workers in travel and temporary relocation expenses, a career extension credit of up to $1,650 for seniors who want to remain in the workforce, and a number of tax credits for investments in clean technology projects, among others.

In addition, Trudeau is asking Freeland to proceed with stripping charity status from pro-life organizations if they provide “dishonest counselling to pregnant women about their rights and options,” a measure included in the Liberals’ platform during the 2021 federal election. The measure is opposed by Conservative MPs who fear it will be used to target pregnancy centres that provide support for pregnant mothers, including parenting training and donation of food and supplies.

Having received her mandate letter, Freeland will now have to present a plan back to Trudeau on her priorities and implementation.

Trudeau issued the mandate letters to cabinet ministers on the last day of the sitting of the House of Commons before the holiday break, which lasts until Jan. 31.