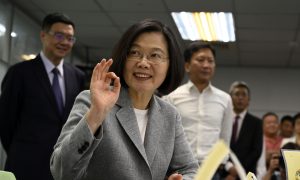 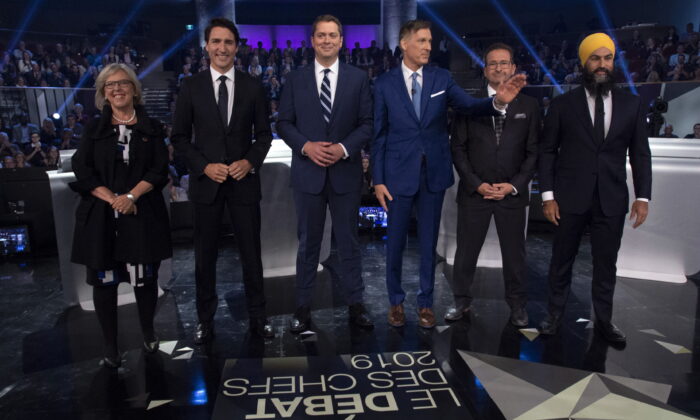 Federal party leaders pose for a photograph before the Federal leaders debate in Gatineau, Que. on Oct. 7, 2019. (The Canadian Press/Adrian Wyld)
Canada

OTTAWA—Liberal Leader Justin Trudeau took the brunt of criticism from the other leaders in Monday night’s debate among the federal party leaders.

Regardless of the question, the NDP’s Jagmeet Singh took every opportunity to repeat his favourite theme: that Liberals and Conservatives alike pander to wealthy corporations whereas the NDP will fight for ordinary Canadians with investments in child care, pharmacare, and dental care.

“Mr. Trudeau does not have the courage to take on the insurance and the pharmaceutical lobbyists who don’t want this to happen,'”Singh said. “You vote New Democrats, we’re going to make sure we’re going to make these things happen because we don’t work for the powerful and wealthy … We work for you.”

The Greens’ Elizabeth May prayed publicly that Trudeau would not be re-elected, with a plan to fight climate change that in her view doesn’t move quickly enough.

His government has done more on climate change than any Canadian government ever has, Trudeau shot back, and has made major policy changes, such as introducing a new child benefit, that have lifted thousands of families out of poverty.

“Justin Trudeau only pretends to stand up for Canada,” Scheer said. “You know, he’s very good at pretending things. He can’t even remember how many times he put blackface on because the fact of the matter is he’s always wearing a mask.”

Scheer accused Trudeau of wearing masks on Indigenous reconciliation, feminism, and on his concern for middle-class Canadians.

“Mr. Trudeau, you’re a phoney and you’re a fraud and you do not deserve to govern this country.”

The format of the debate gave Trudeau no immediate opportunity to respond to Scheer’s attack, but he repeatedly went after Scheer at other times for his personal anti-abortion views and for promoting tax cuts for the rich.

Scheer rounded on Trudeau again later, raising the SNC-Lavalin affair. He accused Trudeau of breaking ethics law, shutting down parliamentary inquiries, and firing two senior female cabinet ministers who objected to his trying to pressure his former attorney general to halt a criminal prosecution of the Montreal engineering giant.

“Tell me, when did you decide that the rules don’t apply to you?” he said.

“Mr. Scheer, the role of a prime minister is stand up for Canadians’ jobs, to stand up for the public interest and that’s what I’ve done,” Trudeau responded.

For Scheer, it was the first time he’s shared the stage with former leadership rival Bernier, who left the Conservatives in 2018 to start up his own People’s Party of Canada. Bernier was not invited to either the debate sponsored and hosted by Maclean’s magazine during the first week of the campaign, nor last week’s French-only debate on TVA in Montreal.

As for the Bloc’s Yves-Francois Blanchet, he was under the least pressure, having little to gain or lose in front of a national audience primarily of English-speaking Canadians. The stakes for the Bloc leader, whose party is running candidates only in Quebec, will be substantially higher during Thursday’s French debate.