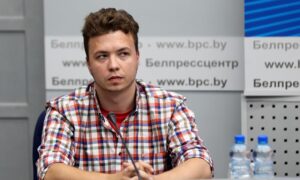 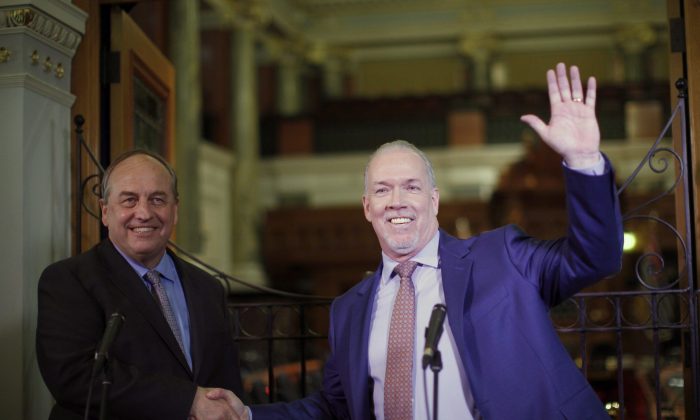 B.C. Green party leader Andrew Weaver and B.C. NDP leader John Horgan speak to media at the legislature in Victoria on May 29, 2017, after announcing they'll be working together to help form a minority government. The alliance casts doubt on the future of the Kinder Morgan pipeline expansion. (The Canadian Press/Chad Hipolito)
Canada

Trudeau Stands by Kinder Morgan Despite Political Shakeup in BC

ROME—Prime Minister Justin Trudeau is standing by the Kinder Morgan pipeline project, even as the New Democrats and Greens in B.C. are teaming up to fight it.

“The decision we took on the Trans Mountain pipeline was based on facts and evidence on what is in the best interests of Canadians and indeed, all of Canada,” Trudeau said May 30 in Rome at a joint news conference with Italian Prime Minister Paolo Gentiloni.

“Regardless of the change in government in British Columbia or anywhere, the facts and evidence do not change.”

The Liberal government understands that growing a strong economy requires taking leadership on both the environment and the economy, he added.

“That is what drives us in the choices we make. We stand by those choices.”

Trudeau’s comments followed the news that B.C.’s anti-pipeline Green party and the provincial NDP have come to an agreement that could see the formation of a minority NDP government in the province, casting doubt on the project’s future.

Both parties have voiced their opposition to the Trans Mountain expansion, which would nearly triple the capacity of the pipeline that runs from Edmonton to Burnaby, B.C.

At a news conference on May 30 alongside B.C. NDP Leader John Horgan, Green party Leader Andrew Weaver was blunt in his rejection of future fossil fuel infrastructure in the province, saying the promised jobs from the sector haven’t happened.

Regardless of the change in government in British Columbia or anywhere, the facts and evidence do not change.
— Prime Minister Justin Trudeau

“I think British Columbians, quite frankly, are sick and tired of being told that the 20th century economy is the economy of tomorrow,” he said.

For Alberta Premier Rachel Notley, the NDP-Green alliance’s stance on the pipeline threatens a project that she says is vital both to her province and the national economy. Notley said she doesn’t believe it makes much difference who is running B.C., because the federal government has already approved the project, so it cannot be vetoed.

“The decision has been taken,” she said May 30 when asked about the pipeline as she was announcing a new hospital for Edmonton.

“It’s been taken by the federal government. It was taken by a federal government that was committed to balancing and driving towards two goals at the same time: environmental sustainability and economic growth on behalf of the whole country.”

She said the pipeline is in the best interests of Albertans and all Canadians—especially British Columbians.

“Quite honestly the province of B.C. can’t grow solely on the basis of escalating housing prices in Vancouver and the Lower Mainland. They need stronger economic growth and the reality is that in Interior B.C., they need the jobs that this pipeline will provide.”

Alberta has long argued that it needs a pipeline to get more of its oil to the West Coast and from there to overseas markets.

Weaver called out Notley’s advocacy of Trans Mountain, saying she is mistaken when she says there’s nothing B.C. can do to stop the federally-approved project.

“There’s an awful lot that can be done in British Columbia to stop the shipping of diluted bitumen in our coastal waters,” he said at the news conference, pointing specifically to the rights of First Nations.

While Kinder Morgan hasn’t yet commented on the political challenges that could be ahead in B.C., Stewart Muir, executive director of Resource Works, a B.C. group that advocates for resource development, raised concerns about the project’s fate.

“If this proves to be a lasting union, then it’s obvious that the Greens would pursue their anti-fossil fuel agenda,” he said.

B.C. Chamber of Commerce president Val Litwin said part of his job going forward will be reminding the NDP-Green alliance of the Interior’s perspective.