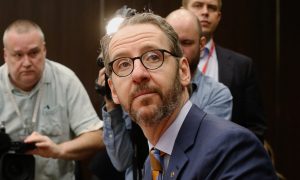 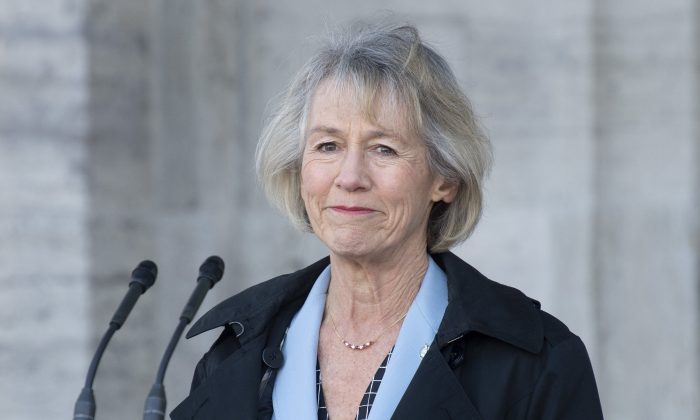 Joyce Murray speaks after being sworn in as the President of the Treasury Board and Minister of Digital Government at Rideau Hall in Ottawa, Canada ,on Mar. 18, 2019. (Adrian Wyld/The Canadian Press)
Canada

Prime Minister Justin Trudeau has shuffled his cabinet for the third time in three months, this time to fill a vacancy left by the sudden departure of former Treasury Board president Jane Philpott, who resigned earlier this month over the government’s handling of the SNC-Lavalin affair.

The prime minister has appointed Joyce Murray as the new Treasury Board president and Minister of Digital Government. Murray, a Liberal MP from Vancouver critical of oil pipelines and tankers in British Columbia, previously served as parliamentary secretary for the portfolio she now oversees.

“Minister Murray will help advance the priorities of the Government of Canada and deliver its commitments to Canadians,” the Prime Minister’s Office said in a statement.

The appointment comes at a time when the Trudeau government is struggling to get ahead of allegations that it attempted to interfere in a criminal case against SNC-Lavalin as well as the resignations of two prominent female cabinet members.

Murray’s predecessor Philpott congratulated the decision in a tweet, saying she thinks the new Treasury Board president “will be great.”

Congratulations @joycemurray, new President of the Treasury Board and Minister of Digital Government. You will be great. Félicitations!

Philpott resigned from cabinet at the beginning of the month over “serious concerns” about the pressure the government put on former attorney-general and Minister of Justice Jody Wilson-Raybould to intervene in the criminal case involving SNC-Lavalin.

In her resignation letter, Philpott says she had lost confidence in how the government handled the matter and how it responded to issues that were raised.

It grieves me to resign from a portfolio where I was at work to deliver an important mandate. I must abide by my core values, my ethical responsibilities, constitutional obligations. There can be a cost to acting on one’s principles, but there is a bigger cost to abandoning them. pic.twitter.com/EwO5dtdgG6

Philpott’s resignation was the third resignation in three months, and the second over the SNC-Lavalin affair. The first resignation was from former Treasury Board president Scott Brison, who has retired from politics. The subsequent cabinet shuffle moved Philpott to Treasury Board president and Wilson-Raybould from Minister of Justice to Veteran Affairs. Wilson-Raybould then resigned in mid-February after a report from the Globe and Mail alleged that she had faced inappropriate pressure to interfere in the case of SNC-Lavalin. Philpott resigned nearly three weeks later.

The day after Philpott’s resignation, Murray sent an open letter to her constituents saying she had “absolute confidence” in Trudeau’s integrity, and praised the diversity of the cabinet, reports the Vancouver Sun.

SNC-Lavalin is facing charges of corruption and fraud for allegedly paying $48 million in bribes to Libyan officials. If SNC-Lavalin were granted a remediation agreement, the company would admit to wrongdoing and face a massive fine, but it would not be criminally convicted. The prosecution has chosen to pursue criminal charges against SNC-Lavalin, and Wilson-Raybould, in her role as minister of justice at the time, did not change that decision.

In her testimony before the Justice Committee, Wilson-Raybould said that she came under consistent pressure from the Prime Minister’s Office, the Privy Council Office, and the finance minister’s office over her decision not to intervene in the court case of SNC-Lavalin.

Gerald Butts, former principal secretary to the prime minister, refuted Wilson-Raybould’s claims in his own testimony to the Justice Committee, saying that the former justice minister never complained about inappropriate pressure over the SNC-Lavalin case until the prime minister decided to move her to a different cabinet role.

The justice committee’s next scheduled meeting is on March 19, the same day the Trudeau government is expected to table the federal budget.