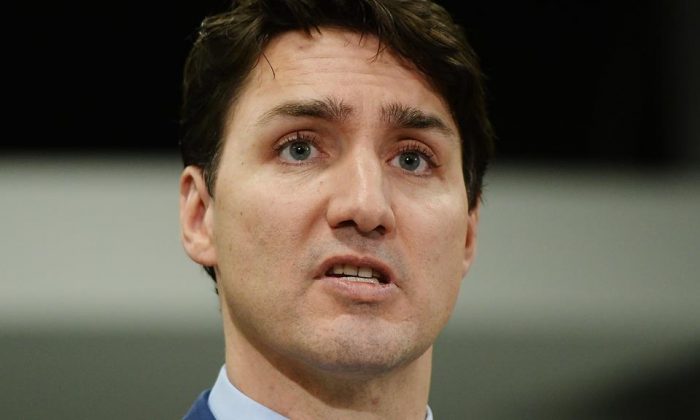 OTTAWA—Jody Wilson−Raybould would still be justice minister if it wasn’t for the resignation of former Treasury Board president Scott Brison, Prime Minister Justin Trudeau said on Feb. 15, downplaying suggestions she was moved for not giving into political arm−twisting.

Trudeau said Brison’s decision to leave politics resulted in having to “move things around” on the team, including shuffling Wilson−Raybould into the veterans affairs portfolio.

“One of the seniors members of our team stepped down and we had to move things around on the team,” Trudeau said. “If Scott Brison had not stepped down from cabinet, Jody Wilson−Raybould would still be minister of justice and attorney general.”

Trudeau was also asked directly if the decision to move Wilson−Raybould out of justice had anything to do with SNC−Lavalin.

“Any time, one makes a decision to shift members of cabinet, there are always a wide range of factors that go into making that decision,” he said.

Last week, the Globe and Mail reported that Wilson−Raybould felt pressured to instruct the director of public prosecutions to negotiate a remediation agreement with Quebec engineering giant SNC−Lavalin rather than pursue a criminal trial on charges of bribery and fraud linked to the company’s efforts to secure business in Libya.

Wilson−Raybould proceeded to quit the cabinet on Feb. 12.

Trudeau didn’t say what reasons she gave for her resignation. He only said he accepted her decision, even if he didn’t totally understand it.

The prime minister faced repeated questions about the brewing controversy during a morning event in the Ottawa suburb of Kanata, leading him to say his government was simply doing its job by discussing the issues and ramifications about the SNC−Lavalin case.

The prime minister said there were “obviously” many discussions unfolding around the company, including questions asked of him by two different Quebec premiers, representatives of the company, MPs, and a range of individuals.

“It was her decision to make and I expected her to make it,” he said. “I had full confidence in her role as attorney general to make the decision.”

Trudeau also slammed anonymous Liberals who made unflattering remarks about Wilson−Raybould by suggesting she was difficult to work with and didn’t seem to be a team player.

For her part, Wilson−Raybould has cited solicitor−client privilege when asked to speak publicly on the matter.

In a statement issued at the time of her resignation, she said she had sought legal counsel from former Supreme Court justice Thomas Cromwell.

“I am aware that many Canadians wish for me to speak on matters that have been in the media over the last week,” she said. “I am in the process of obtaining advice on the topics that I am legally permitted to discuss in this matter.”