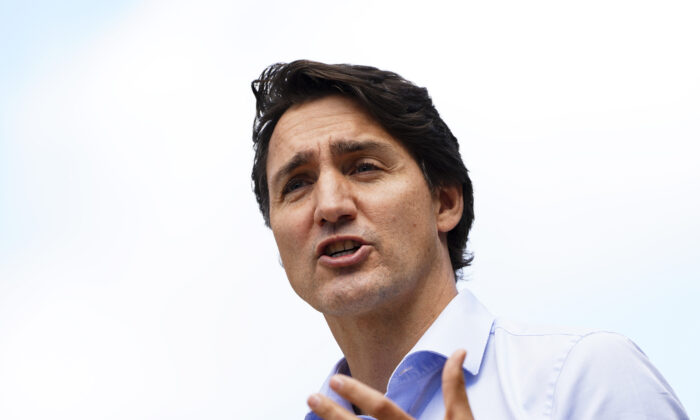 Prime Minister Justin Trudeau speaks to media as he visits a vaccine clinic in Ottawa on Sept. 28, 2021. (The Canadian Press/Sean Kilpatrick)
Canada

Prime Minster Justin Trudeau says he will reflect on Canada’s relationship with China as he prepares to form a new government in the coming weeks.

During a press conference on Sept. 28, Trudeau was asked if he will take a harder line on China and ban Huawei from 5G as many of Canada’s allies have, now that the Canadians Michael Kovrig and Michael Spavor have returned to Canada. The pair was arbitrarily detained by the communist regime for nearly three years in what was widely seen as “hostage diplomacy.”

“We have to thank our allies and partners around the world who stood with us, not just Canadians, but around the world. Now, we have to reflect on our relationship with China, and the world, and that includes the Huawei issue,” Trudeau said. “We will be making that decision as we work on our plan for this next term.”

Kovrig and Spavor, often called the “two Michaels,” were detained by the Chinese government on charges of espionage in December 2018, days after Canada arrested Meng Wanzhou, Huawei’s chief financial officer and daughter of the company’s founder, on a U.S. warrant to have her extradited on charges of bank and wire fraud.

The two men arrived in Canada on Sept. 25, after Beijing released them on Sept. 24, following a deal with the United States that allowed the Huawei executive to return to China on the same day.

Trudeau did not respond directly when he was asked why his Liberal government remains unsuccessful in rescuing Huseyin Celil, another Canadian citizen and Uyghur human rights activist who has been detained by the Chinese authorities since 2006.

“In the case of the [two Michaels], the challenge of their detention for political reasons, was something that galvanized both public opinion in Canada and around the world, and we were able to demonstrate that we are a country of the rule of law,” he said.

“We never flinched on applying the fundamental rules of our justice system, of our approach on that, and we will continue to advocate for people who are wrongly imprisoned around the world.”

Many other Canadians are still arbitrarily detained in China, including Sun Qian, a Falun Gong practitioner who was imprisoned for her faith.

Sun was arrested in Beijing in February 2017 and has been held in custody ever since. On June 30 of this year she was sentenced by a Beijing court to eight years in prison for her belief in Falun Gong, a self-cultivation practice that includes meditative exercises and moral teachings based on the tenets of truthfulness, compassion, forbearance.

In January, Sun reportedly renounced her Canadian citizenship and is suspected of giving a coerced confession under prolonged torture while in police custody.

During the press conference, Trudeau said he had confirmed earlier that day with Gov. Gen. Mary May Simon as to his intention to form the next government.

He said Chrystia Freeland will continue serving as the deputy prime minister and minister of finance. He also intends to name other cabinet ministers in October, and resume the parliamentary session before the end of fall.