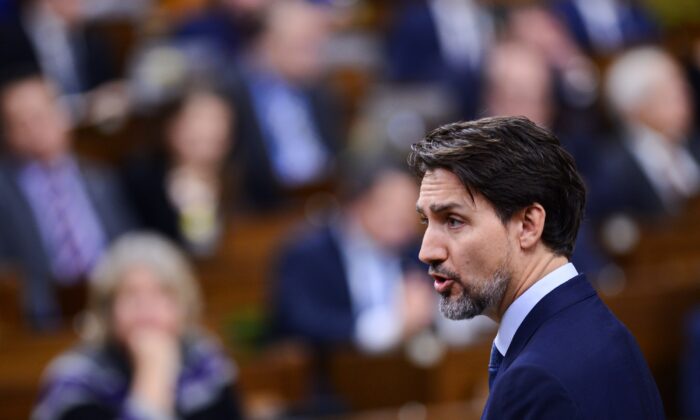 Prime Minister Justin Trudeau delivers a statement in the House of Commons on Parliament Hill on Feb. 18, 2020. (The Canadian Press/Sean Kilpatrick)
Canada

OTTAWA—Prime Minister Justin Trudeau says it’s past time to resolve the nationwide blockades and tensions over a British Columbia pipeline project and is asking demonstrators to engage with his government to seek a solution.

Speaking in the House of Commons Tuesday morning, the prime minister warned that a path forward won’t be easily found, but says everyone has a stake in getting this right.

He said the protests are serious and a critical moment for the country.

Trudeau is under increasing pressure to end the blockades, which he says he wants to do quickly but peacefully.

Hereditary chiefs in the Wet’suwet’en First Nation oppose the natural-gas pipeline through their traditional territory, though it’s received approval from elected band councils.

Since the RCMP moved in to enforce an injunction and keep the hereditary chiefs and their supporters away from the pipeline worksites, protests by Indigenous people and supporters have shut down the CN rail network in eastern Canada, suspended most Via Rail passenger service, and temporarily blocked traffic on streets and bridges and at ports in multiple cities.

Trudeau said people are upset and patience is running short

Trudeau said he is formally extending his government’s hand in partnership and trust to Indigenous demonstrators.

Opposition Conservative Leader Andrew Scheer replied that Trudeau’s speech was a weak response and a failure of leadership. He called on the prime minister to denounce what Scheer called radical activists.

The response, and heckling in the House of Commons, came hours after the national chief of the Assembly of First Nations called for calm and constructive dialogue to ease tensions.

National Chief Perry Bellegarde told reporters in Ottawa that governments and industry have to give the time and space to work with the Wet’suwet’en people.

Bellegarde said he has spoken with all parties involved to find a way forward.

“We say we want to de-escalate and we want dialogue,” he said.

“And I say our people are taking action because they want to see action—and when they see positive action by the key players, when they see a commitment to real dialogue to address this difficult situation, people will respond in a positive way.”

Other chiefs speaking alongside Bellegarde on Tuesday morning suggested it may be time to bring the situation to a peaceful conclusion and bring down the blockades.

Indigenous-relations ministers both federally and in B.C. are seeking to meet leaders of British Columbia First Nations in hopes of finding a solution.

And this evening, the House of Commons will hold an emergency debate on the issue after the New Democrats and Bloc Quebecois successfully lobbied Speaker Anthony Rota.

The parties want a chance to debate and ask the government questions about the blockades.

Also Tuesday, Via announced it expects to resume partial passenger service Thursday between Ottawa and Quebec City, including a stop in Montreal.