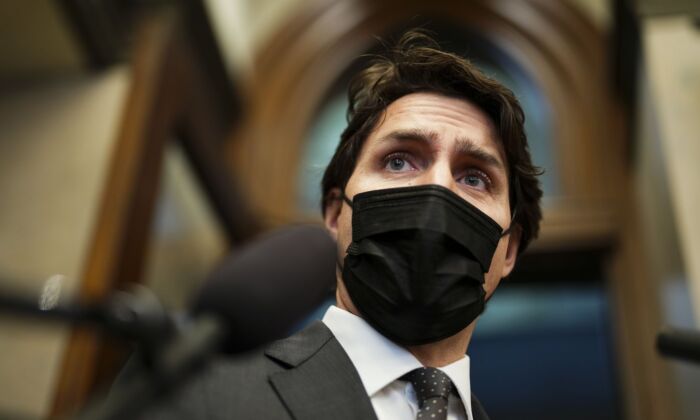 Prime Minister Justin Trudeau talks to reporters as he arrives to the House of Commons for question period on Parliament Hill in Ottawa on April 5, 2022. (The Canadian Press/Sean Kilpatrick)
Canada

Prime Minister Justin Trudeau isn’t going to provide more details about his government’s pledge to send a new round of military aid to Ukraine—at least not yet.

The prime minister said Wednesday that he doesn’t want to outline the specifics of what will be sent, and where the government is getting it from, because of security concerns.

Trudeau said he wants to be careful about what he publicizes about the delivery of military equipment in the context of Russia’s unprovoked invasion of Ukraine.

He said he hopes to share more in the coming days about what is being sent to Ukraine.

“People understand that delivery of military equipment in the context of an illegal war by Russia is something that we have to be a little bit careful about—what we broadcast and publicize and what we’re doing,” Trudeau said during a media availability in Kitchener, Ont.

“But in the coming days, I certainly hope to be able to share more about what is being sent and what was sent.”

Earlier this month, Zelenskyy released a list of equipment he said the Ukrainian military needed to fight Russia, including 155-millimetre heavy artillery guns and ammunition.

The Liberal government has previously dipped into the Canadian Armed Forces inventory to provide lethal aid to the Ukrainian military as it fights a Russian invasion that started in late February and has so far killed thousands of people.

But Defence Minister Anita Anand has suggested the military’s spare inventory is tapped out, and that the government—which set aside $500 million in military assistance for Ukraine in its latest budget—planned to buy equipment from vendors.

Trudeau said that while the government was pledging more equipment for Ukraine, it would ensure the Canadian military could contribute fully to NATO operations in Europe.

“As we support Ukraine, including with military equipment and munitions, we are also making sure that Canada continues to have the capacity to operate—not just to defend Canada but to participate fully in NATO operations as well,” he said.