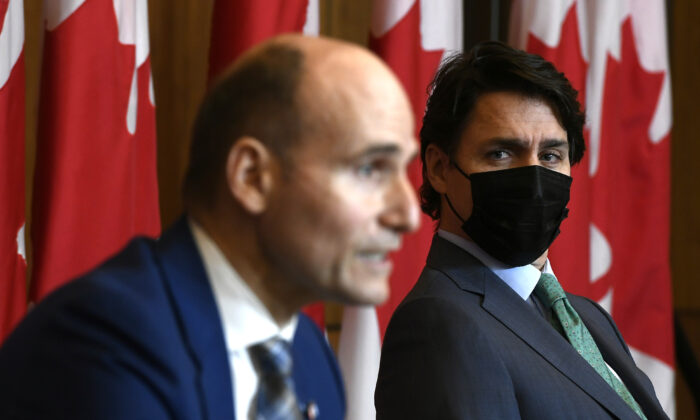 Prime Minister Justin Trudeau listens as Minister of Health Jean-Yves Duclos speaks during a news conference on the COVID-19 pandemic in Ottawa, on Jan. 5, 2022. (The Canadian Press/Justin Tang)
Canada

Prime Minister Justin Trudeau and the Liberal health minister were pressed repeatedly on Jan. 12 to state their position on Quebec’s proposal to tax the unvaccinated, but neither would commit, saying instead that more details are needed on the measure before they can comment.

“Obviously, like people across the country, we’ve received that proposal with interest by the Quebec government,” Trudeau said at a press conference in Ottawa as he provided a COVID update.

“But there’s a lot more details that we have to hear on how this would work before I can make any comments on it.”

Trudeau said details are important because he wants to make sure the measure respects the Canada Health Act. The act guarantees universal health care access to Canadians.

“We have to know what will be the conditions of this proposal from Quebec to make sure it’s efficient and in line with the principles and values that are dear to us,” he said.

When asked if he agreed in principle with the idea, Trudeau said the federal government has already enacted “harsh” measures on the unvaccinated, such as barring them from planes and the public service. He also said that additional measures were being considered.

“We know that various jurisdictions are looking at a number of measures that will also encourage people to get vaccinated.”

Health Minister Jean-Yves Duclos also said he was awaiting the details, but mentioned he’s discussed the matter with Quebec and said “we are all on board when it comes to supporting universality of access to health care across Canada.”

The issue of the legality of the measure has spurred debate, with some like the Canadian Civil Liberties Association (CCLA) arguing it is a “constitutionally vulnerable proposal.”

The CCLA also raises the issue that it will penalize already marginalized people.

“We know that some of those who remain unvaccinated are individuals who face serious barriers to accessing health care, and many have a low level of trust in the system because of negative experiences in the past.”

Zwibel pointed out that there aren’t any fines for people who make poor health choices or partake in high risk activities.

On Jan. 11, Quebec announced it would impose the tax on the unvaccinated through its revenue agency, with affected Quebecers having to pay an extra “health contribution” when filing their annual taxes.

The amount hasn’t been revealed, but Premier François Legault said it would be “significant.”

The rationale for the tax is that because a higher percentage of unvaccinated are being hospitalized than the fully vaccinated, they should be penalized.

As of Jan. 11, government data says 82 percent of Quebecers are fully vaccinated but they represent 66 percent of hospitalizations for/with COVID-19 and 53 percent of ICU admissions in the last 28 days.

According to the data, the vast majority of COVID-19 deaths in the province (97.8 percent) are people with pre-existing medical conditions or over 60 years old (96.7 percent), suggesting COVID-19 mainly poses a grave health risk to specific segments of the population. Data on the health status of individuals currently hospitalized for/with COVID-19 is not available.