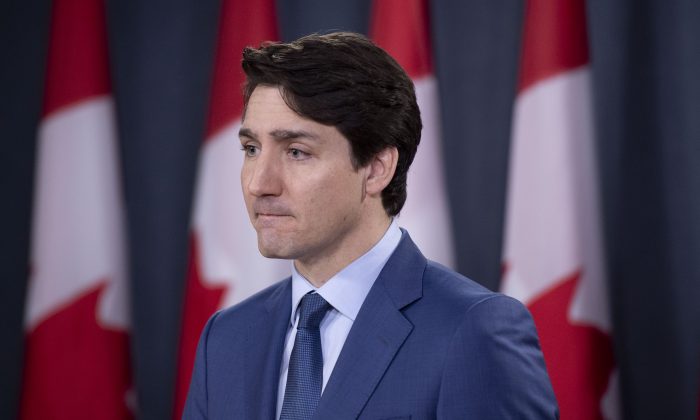 Prime Minister Justin Trudeau says he should have been aware of an “erosion of trust” between his office and former minister of justice Jody Wilson-Raybould over the SNC-Lavalin issue, but he stopped short of apologizing to her.

“Over the past months, there was an erosion of trust between my office and specifically my former principal secretary, and the former minister of justice and attorney general,” Trudeau said at a press conference in Ottawa this morning.

“I was not aware of that erosion of trust. As prime minister and leader of the federal ministry, I should have been.”

Wilson-Raybould testified to the House of Commons justice committee that she came under inappropriate pressure from the prime minister’s office to halt the criminal prosecution of Montreal-based SNC-Lavalin. She says she was told repeatedly the decision was up to her, but attempts to convince her to choose a remediation agreement for the company—which would avoid a criminal trial—were relentless.

Wilson-Raybould was moved from the Justice file to Veteran Affairs in an early January cabinet shuffle. She resigned shortly after.

Her close friend and cabinet ally, former Treasury Board president Jane Philpott, resigned Monday, saying she had lost confidence in how the government had dealt with its handling of the SNC-Lavalin affair and the issues it raised.

SNC-Lavalin is an engineering giant that employs thousands of Canadians across the country. The company faces charges of fraud and corruption in connection with work sought in Libya. If criminally convicted, the company would be barred from bidding on Canadian government contracts, which would have potentially devastating effects.

Trudeau’s former principal secretary Gerry Butts, who also resigned last month, told the justice committee Wednesday that he wanted Wilson-Raybould to get a second opinion from a retired Supreme Court judge, as the law in question—the remediation-agreement provisions—had never been applied before. He says that, at that time, the former justice minister did not suggest anyone had done anything wrong.

At this morning’s press conference, Trudeau maintained that any concerns expressed by his office to the justice minister of the SNC-Lavalin case was about jobs, not about politics. He confirmed that he raised being a Quebec MP representing the federal riding of Papineau during his discussion with Wilson-Raybould, but said the comment wasn’t partisan in nature.

“It’s our job as parliamentarians to defend the interests of the communities we were elected to represent, be the voice of those communities in Ottawa,” he said.

“I stress the importance of protecting Canadian jobs and reiterated that this issue was one of significant national importance.”

Both Trudeau and Wilson-Raybould have said she left the meeting with plans to discuss the matter with her deputy minister and clerk, and both acknowledged that the decision regarding the SNC-Lavalin case was hers alone to make.

“In the months that followed that meeting, I asked my staff to follow up regarding Ms. Wilson-Raybould’s final decision,” Trudeau said. “I realize now that, in addition, I should have done so personally, given the importance of this issue and the jobs that were on the line.”

When was asked directly whether he was apologizing for how the SNC-Lavalin affair has unfolded, Trudeau stressed that he continues to believe there was “no inappropriate pressure” but that there were lessons to be learned.

“Any time we go through periods of internal disagreement and challenges to internal trust, as we have, there are things we have to reflect on, and understand, and do better next time,” he said.

Trudeau said they will be seeking expert opinions on a number of issues, including the dual role of minister of justice and attorney general as well as operational policies and practices of cabinet, the public service, and political staff.