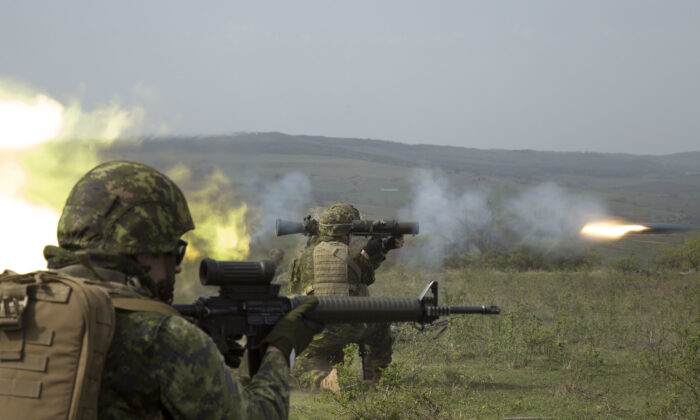 Canada announced Monday it will send anti-tank weapons to bolster Ukraine and impose additional sanctions to punish Russia for its invasion.

At a press conference in Ottawa on Feb. 28 attended by some of his cabinet ministers, Prime Minister Justin Trudeau said Canada and its allies are not seeking to provoke or escalate tensions with Russia, which said it was putting its nuclear forces on high alert on Feb. 27.

While Trudeau said this threat is a concern for G7 leaders, they “are firm and determined to continue to stand strong together in defence of democracies.”

On the military side, Trudeau said Canada would also be providing airlift support to move supplies and aid and contribute to other NATO efforts.

Defence Minister Anita Anand said one plane left for Europe Monday and another will leave later this week, and this effort is facilitated by 50 Canadian Armed Forces (CAF) personnel.

The anti-tank weapons to be shipped are the Carl Gustav shoulder-fired recoilless rifles, which will come out of the CAF inventory. The quantity isn’t clear, with Anand saying the amount would be 100 during her prepared remarks and then 125 when answering a question. The minister said Canada is also providing 2,000 munitions that have been upgraded in Canada.

The Carl Gustav can fire a number of different types of munitions, one of which is laser-guided for improved accuracy. It is unclear what type of munitions Canada is providing.

Some reports indicate that the U.S.-provided anti-armour shoulder-fired Javelin system is making an impact on the battlefield, slowing the Russian advance.

Canada’s announcement of military aid follows another announcement made on Feb. 27 pertaining to sending non-lethal aid in the form of body armour and gas masks. Earlier this month, Canada said it was sending approximately $10 million in lethal aid.

Trudeau also announced additional measures targeting Russia after imposing sanctions on its banks over the weekend.

The prime minister said Canada would stop importing Russian crude oil, “an industry that has benefited President Putin and his oligarchs greatly.”

“And while Canada has imported very little amounts in recent years, this measure sends a powerful message,” he said.

In 2019, 3 percent of Canada’s oil imports were from Russia, according to the Canada Energy Regulator.

Dan McTeague, gas price expert and president of Canadians for Affordable Energy, told The Epoch Times that Ottawa should go further by preventing Russian vessels from using Canadian waters to deliver 800,000 barrels of oil a day to the U.S. West Coast.

“More than banning Russian oil, we should be making efforts to displace it,” added McTeague, referring to unleashing Canada’s oil-producing potential to hurt the Kremlin’s bottom line.

In order to tackle disinformation, Trudeau said his government will also be asking the Canadian Radio-television and Telecommunications Commission (CRTC) to review the presence on Canadian airwaves of Russia Today (RT), an English-language Russian state media.

Prior to this announcement, major television providers said they were removing RT from their channel lineup.

When asked by a reporter if he would consider applying this measure to other state-owned outlets like China’s, Trudeau said it’s a “good question and one we should absolutely and are indeed reflecting on,” but he added for the time being the focus is on Russia.

On the humanitarian front, Trudeau announced that the government will match donations made to the Canadian Red Cross Humanitarian Crisis Appeal up to $10 million, and this will come in addition to the $50 million in humanitarian aid already committed by Canada.

Minister of Immigration Sean Fraser said that since Jan. 19, Canada has streamlined the immigration process for Ukrainians, which resulted in the approval of nearly 4,000 applications.