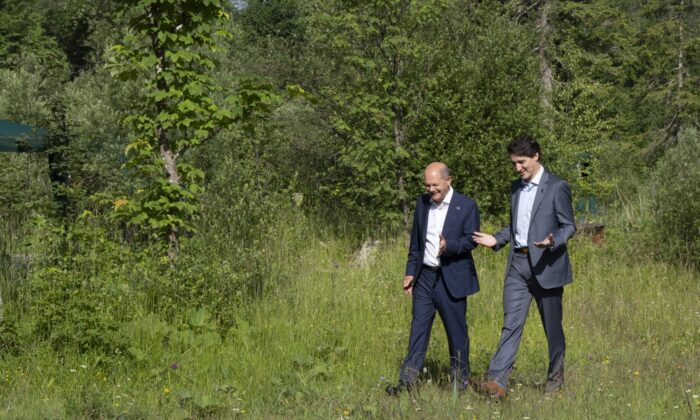 Prime Minister Justin Trudeau said the government is open to easing regulatory requirements for projects that would facilitate the export of Canadian natural gas to Europe, but questioned whether a business case exists for such investments.

The comments came Monday during a joint news conference with German Chancellor Olaf Scholz in Montreal as the prime minister hosted the German leader during a visit that will also include stops in Toronto and Newfoundland.

The question of what role Canada could play floated like a cloud over the proceedings as the two leaders accused Russia of using its energy exports to Europe as a weapon to undermine public support for Ukraine on the continent.

They went on to underscore the importance of weaning Germany and the rest of Europe off Russian oil and gas over the short term, and transitioning away from such energy sources over the medium-to-long term.

The federal government is ready to do its part by making it easier for companies to get regulatory approval to transport liquified natural gas from other parts of Canada to the east coast for export to Germany, Trudeau told reporters as Scholz looked on.

“From the government’s standpoint, easing the processes—because of the difficulty that Germany is facing—to make sure that we can move through regulatory hurdles more quickly is something we’re willing to do,” he said.

Yet the prime minister suggested it will ultimately be up to industry to determine whether it makes business sense to invest in the facilities and other infrastructure needed to transport Canadian gas to Europe.

“There are a number of potential projects, including one in Saint John, and some others that are on the books for which there has never been a strong business case because of the distance from the gas fields,” he said.

“We are looking right now—and companies are looking—at whether or not, in the new context, it makes it a worthwhile business case, to make those investments. … It needs to make sense for Germany to be receiving LNG directly from the east coast.”

Canada could also export its LNG to other markets around the world and in the process free up gas from other sources that could be used by Germany and Europe, Trudeau added.

“We are certainly aware that even as the world needs to decarbonize and get off fossil fuels, there is a need right now to counter the energy crisis created by Russia,” he said.

Canadian Gas Association president and CEO Timothy Egan welcomed the prime minister’s talk about easing regulatory hurdles for industry, which he described as critical for moving ahead with various projects.

“I don’t think industry is looking for any financial support from government, but it is looking to see the regulatory process clarified and made more expeditious,” he said.

“The prime minister indicated a willingness to make the regulatory process quicker and clearer. That’s enormous.”

Deputy Prime Minister Chrystia Freeland first raised the idea of government action to make it easier for LNG exports from Canada while visiting Saint John in early July, where she met with representatives from across industry.

While the government has since held a handful of meetings and consultations, Egan said much engagement is needed.

“We certainly have been in touch with Natural Resources Canada on various occasions about the situation, and we know that the government is meeting with European counterparts,” he added.

“But I would say that we’ve had more overtures from European governments and industry … than we have from our own government.”

During Monday’s news conference, both Trudeau and Scholz underscored the need to transition from fossil fuels clean energy over the medium-to-long term. The two leaders are expected to sign a deal on hydrogen later this week.

Yet Scholz painted a picture of Germans taking extreme measures to shore up their energy supplies in the short term to survive the coming winter as the country struggles with a decline in Russian energy exports.

Russia has cut gas flows in the Nord Stream 1 pipeline to Germany to 20 percent of capacity and recently announced it would shut down the line entirely for three days at the end of the month, citing the need for unscheduled maintenance.

Measures taken by Germany include massive new investments in ports and pipelines to receive gas from Norway, the Netherlands and other parts of Europe, and a reversal on recent moves to phase out oil and coal use in the country.

The leaders also defended Canada’s decision to grant a permit allowing gas turbines repaired in Montreal to be sent back to Russian state-owned energy giant Gazprom, which operates the Nord Stream 1 pipeline.

Ukraine has criticized Trudeau and his government for agreeing last month to Germany’s request to exempt Siemens Canada from sanctions against Russia so it could return a turbine for use in the pipeline.

The turbine had been under repairs at Siemens’ Montreal facility, the only location in the world capable of maintaining the equipment. It was delivered to Germany and was supposed to go to Russia from there, but Russian authorities have refused to accept it.

Trudeau and Scholz accused Russia of trying to use the issue as a cover for cutting gas exports. They also said Moscow was trying to pit Canada and Germany against each other, and divert public anger at the resulting increase in energy prices away from itself.

While they claimed to have effectively called Russia’s bluff, as evidenced by Gazprom’s refusal to take the turbine, Trudeau sidestepped questions about whether his government would now block the import, repair and return of five other turbines.

On Monday night, Trudeau hosted an official dinner for Scholz at the Royal Ontario Museum, where the prime minister and chancellor both delivered brief remarks.

About 300 guests raised wine glasses as Trudeau toasted the “friendship between” the “two unyielding democracies,” and to working together with a “progressive, democratic and green vision of the economy.”

By Lee Berthiaume and Virginie Ann