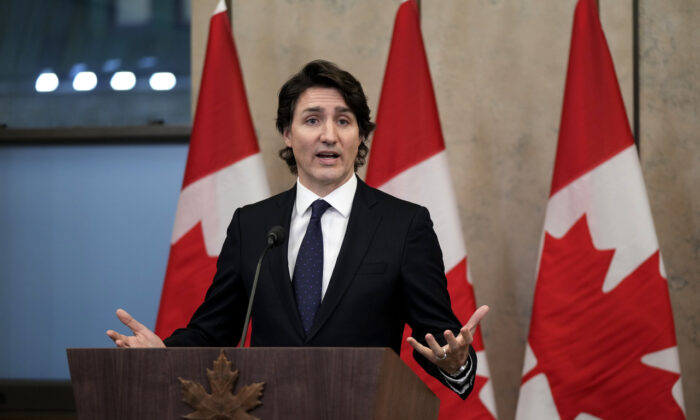 Trudeau: Ontario’s Declaration of State of Emergency Over Trucker Protests ‘Responsible and Necessary’

Prime Minister Justin Trudeau says Ontario Premier Doug Ford did the right thing by declaring a state of emergency over the trucker protests in Windsor and Ottawa.

“Ontario’s announcement this morning is responsible and necessary,” Trudeau said at a press conference on Feb. 11.

The same day, Ford said at a press conference that the state of emergency involves measures such as imposing fines of up to $100,000 and up to a year of imprisonment for non-compliance, as well as additional authority for the police to take away the personal and commercial licences of those who don’t comply.

Trudeau said that in his call  with U.S. President Joe Biden on the morning of Feb. 11, the two talked about the challenges caused by the border blockages and protests, and that “for the security of people and the economy, these blockades cannot continue.”

“Make no mistake, the border cannot and will not remain closed,” he said.

Since Feb. 6, protesters have had a blockade at the Ambassador Bridge crossing which connects Windsor to Detroit. It’s the busiest border crossing between the two countries, with over $300 million worth of goods moving on the bridge each day. Some other border crossings across the country have been blocked by vehicle convoys as well, including in Manitoba and Alberta.

The protests were inspired by the Freedom Convoy movement that began as a demonstration against a requirement for truck drivers to have COVID-19 vaccination for cross-border travel. The protests grew in size as people from across Canada joined in, converging in Ottawa on Jan. 29, with many saying they will stay until all COVID-19 mandates are lifted.

In previous remarks, Trudeau linked the trucker protests with racism and violence, and has refused to meet with the convoy organizers.

Earlier this week, two Liberal MPs dissented from their government’s position, saying those who have legitimate concerns shouldn’t be demonized and that pandemic policies shouldn’t be politicized.

Trudeau was asked at the press conference if he regrets his approach to the protesters, and if he thinks his remarks angered them. He didn’t directly respond to the question, instead saying that the majority of truckers are vaccinated.

“People are tired of COVID, they’re tired of the restrictions, but at the same time, as a government, we made a promise to Canadians to have their backs every step of the way for as long as it takes,” he said.

Earlier this week, Alberta and Saskatchewan said they are removing their COVID-19 vaccine passport programs, and a number of other provinces including Quebec, Prince Edward Island, and Newfoundland and Labrador said they are easing some of their COVID-19 restriction measures.