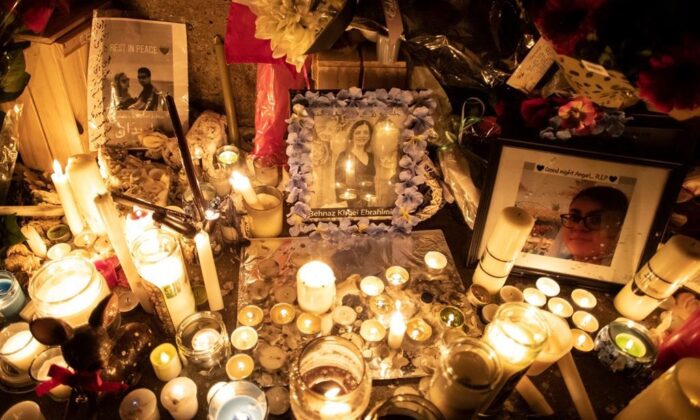 Photographs are left among candles at a memorial during a vigil in Toronto on Jan. 9, 2020, to remember the victims of the Iranian air crash. (The Canadian Press/Chris Young)
Canada

OTTAWA—Prime Minister Justin Trudeau met families of the victims of the Tehran plane crash on Jan. 10 as Canadian investigators scrambled to get to Iran.

The private conversations between Trudeau and the families of some of the victims in Toronto follow the prime minister’s assertion on Jan. 9 that multiple intelligence sources had indicated the Ukraine International Airlines flight was brought down by an Iranian missile.

The crash killed 176 people, including 138 who were bound for Canada.

The Transportation Safety Board of Canada, meanwhile, was working to get a team into Iran after being invited by its government to take part in the investigation into the cause of the crash. Iran has also invited Russia, Ukraine, France, and Boeing, which built the plane, to participate.

“We are still working the details on the extent of the TSB’s participation in this investigation,” spokesman Alexandre Fournier said in an email.

Yet as Trudeau met the families and the TSB was preparing its team, the administration of U.S. President Donald Trump announced the details of its promised new sanctions against Iran. That country, in return, accused the U.S. of spreading lies about the crash.

The missile attacks were in retaliation for the U.S. killing of Iranian Maj.−Gen. Qassem Soleimani last week.

Iran, meanwhile, has defended its handling of the crash investigation, with its officials ruling out a missile attack.

Iran has called on the U.S. and Canada to release information backing allegations it was actually brought down by an Iranian missile.

Ukrainian President Volodymyr Zelensky echoed those calls, writing on Facebook in Ukrainian that while allegations the plane crashed because of a missile has “not been ruled out, as of today it is not confirmed.”

“We urge all international partners—especially the governments of the United States, Canada, and the United Kingdom—to submit data and evidence relating to the disaster.”