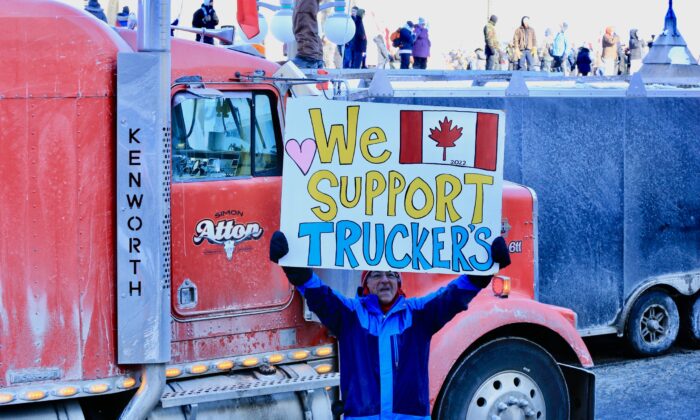 A protester participating in the truck convoy protest against COVID-19 mandates and restrictions holds a sign on Parliament Hill in Ottawa on Jan. 29, 2022. (Jonathan Ren/The Epoch Times)
Viewpoints

Trudeau Is Creating Societal Rifts That May Take Decades to Resolve

In all my years I have never seen a Canadian Prime Minister identify and vilify a large, identifiable group in the way Justin Trudeau did on Jan. 31. While I didn’t expect the prime minister to be supportive of the thousands of protesters gathered on Parliament Hill, I was flabbergasted listening to him inflaming the situation and labelling them as racists and extremists.

Despite the protests being remarkably peaceful and respectful, Trudeau chose to focus on the few outlying incidents caused by a handful of individuals when he said: “We won’t give in to those who fly racist flags. We won’t cave to those who engage in vandalism or dishonour the memory of our veterans.”

Tens of thousands of citizens came out to those protests supported by hundreds of thousands if not millions of Canadians who couldn’t make it there themselves. Even if this still represents a minority of Canadians, it clearly represents a huge number of them and our prime minister has now smeared them as being racists who commit crimes and disrespect veterans.

This was an appalling statement from Trudeau about citizens he is ostensibly supposed to be leading and representing. Many of the demonstrators were people of colour, and doubtless there were many veterans among them. How must that have felt hearing the leader of their nation deriding them this way?

We are seeing an unprecedented protest among normally complacent Canadians. Many people feel they have no representation or mechanism to have their concerns heard so they have resorted to protest. The prime minister doesn’t have to support their goals, but he should feel at least a moral obligation to respect them. Trudeau’s treatment of these Canadians has been his most egregious lapse in leadership to date—and that says a lot.

Thousands of people remained on Parliament Hill on Feb. 1, and there is no indication of how or when this protest may end. We need cool heads and respectful discourse to resolve what may turn into a protracted standoff. It is going to be very hard to begin any kind of negotiations now.

The lapse of federal leadership on the Truckers for Freedom convoy isn’t just coming from the Liberals.

Conservative Party Leader Erin O’Toole hasn’t exactly been a beacon of leadership as the protests have developed. Much like Trudeau did, O’Toole remained silent in the days leading into the weekend protests even though it was clear that something huge was building. Once O’Toole did finally address the event, his statements remained carefully neutral and tepid. I guess he should be credited with not coming out and insulting the protesters, but he has not proven to be inspiring either.

O’Toole is now dealing with a caucus revolt, with nearly a third of Conservative MPs calling for a review of his leadership. He likely will be more focused on saving his political hide than on defending a minority within his constituency.

So who will speak up for the rights of Canadians who want an end to pandemic restrictions? Who will defend these people as the man holding the top office in the country abuses them in an act of political division?

Some individual political figures have come out and spoken up in defence of the demonstrators in Ottawa, but they don’t represent the political leadership of the nation.

The protesters now feel isolated, shunned, and politically homeless. This will foster a sense of dejection and could lead to some people trying more desperate acts in order to get their message out.

It almost felt that the establishment was disappointed with last weekend’s demonstrations being peaceful and not devolving into a “January 6th” type of incident. Now members of the establishment, including most media, appear bent on inflaming the situation and possibly inciting just such an incident as they push demonstrators into a corner.

If the leader of any nation treated an ethnic or religious minority in the way Trudeau did with the protesters and people who have chosen not to be vaccinated, the world would condemn them.

Isolating and demonizing any group in society should never be done by a political leader. Trudeau is fostering societal rifts that may take decades to resolve, if ever. It is the height of irresponsibility to divide Canadians for the sake of political expediency.

Canada needs leadership right now. We need a unifier. We need somebody who can represent the majority while respecting the minority.

Everybody wants to see a peaceful resolution to the protests in the long run. It is impossible to see how that will happen as the country suffers from a void of political leadership.

Canada is at a turning point. Until we have some national leadership, I am afraid that we will only be turning for the worst.