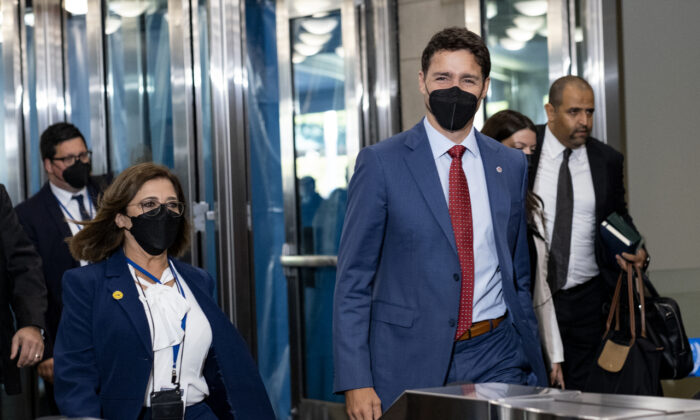 Prime Minister Justin Trudeau is in New York for a two-day meeting with allies and partners at the 77th session of the United Nations General Assembly (UNGA).

As co-chair of the UN Sustainable Development Goals (SDG) Advocates group, Trudeau’s UN agenda will include “advocating for strong climate action, the empowerment of women and girls, and reducing inequality,” according to a Sept. 17 news release. from the Prime Minister’s Office (PMO).

He will also meet with world leaders to address the global food crisis and highlight Canada’s role in supporting food security, said the release.

“Throughout the day today and tomorrow, we’re meeting with partners from around the world at the @UN General Assembly. We’ll work on solutions to some of the world’s most pressing issues—and we’ll continue to be focused on building a better future for Canadians,” Trudeau said on social media on Sept. 20.

Trudeau will also participate in an executive roundtable on “Unlocking and Realizing the Benefits of Inclusive Job Growth,” with former U.S. secretary of state Hillary Clinton.

His agenda includes two summit meetings in the afternoon, including the Global Food Security Summit and the Christchurch Call Summit.

Trudeau will be meeting with his counterparts, New Zealand Prime Minister Jacinda Ardern and France’s President Emmanuel Macron, where the news release said he will “reiterate Canada’s pledge to eliminate terrorist and violent extremist content online.”

Trudeau will hold a bilateral meeting with Chandrikapersad Santokhi, President of the South American country of Suriname.

The final event on Trudeau’s UN agenda for today is a meeting entitled “Countdown to CBD COP15: Landmark Leaders’ Event for a Nature Positive World.” He will be accompanied by Environment Minister Steven Guilbeault. Trudeau will co-chair the Ocean Panel leaders’ meeting, entitled “Financing Ocean Solutions for People and Planet: Delivering on SDG 14.”

For the second day of the UNGA trip on Sept. 21, Trudeau’s agenda includes more conferences and meetings with world leaders.

He is scheduled to first attend the “Global Fund to Fight AIDS, Tuberculosis, and Malaria Seventh Replenishment— Pledging Conference.” The Global Fund is a partnership between governments, private sector, non-profits, and people affected by the diseases, to support country-led prevention, treatment, and care programs.

Trudeau will later host a meeting with regional partners in the Caribbean, with a focus of the meeting on supporting Haiti’s stability and sustainable development.

The Prime Minister will attend the Welcoming Reception for Heads of Delegation hosted by U.S. President Joe Biden and First Lady Jill Biden.

Trudeau is expected to participate in additional meetings to discuss other global issues, including the COVID-19 pandemic and the Russian-Ukrainian War, as well as the topic of “continued need to counter Russian disinformation,” according to the release.

Minister of Foreign Affairs Mélanie Joly will also be in attendance at the UNGA meeting, according to the itinerary released by the PMO.