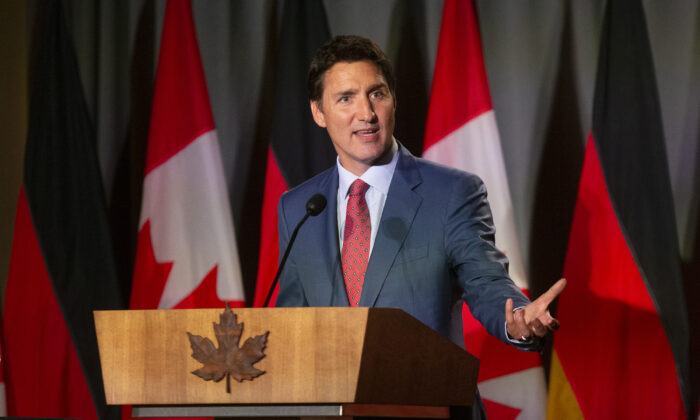 Prime Minister Justin Trudeau honoured the victims and survivors of communism and Nazism that terrorized the European countries, in a statement marking Black Ribbon Day on Aug. 23.

“Today, we join people from around the world to honour the victims and survivors of communism and Nazism in Europe, and pledge to continue standing up for all those who still face violence and oppression at the hands of authoritarian regimes,” Trudeau said in the statement.

“On behalf of the Government of Canada, I encourage all Canadians to pay tribute to those who have suffered or lost their lives to totalitarian and authoritarian regimes—past or present. Together, we must continue to reject extremism, intolerance, and oppression, while promoting human rights, freedom, and democracy here in Canada and around the world.”

Black Ribbon Day, officially the European Day of Remembrance for Victims of Stalinism and Nazism, honours those who fell prey to communism, Stalinism, Nazism, and Fascism. Aug. 23 was selected for the day of remembrance to coincide with the signing of the Molotov-Ribbentrop Pact, a 1939 non-aggression pact between the Soviet Union and Nazi Germany, which included a protocol for dividing Poland, Romania, and certain Baltic countries under their authoritarian rule.

“Across Central and Eastern Europe, millions of people suffered tremendously under totalitarian regimes,” Trudeau said. “They were robbed of their basic human rights, forced to flee their homes, and murdered.”

“Many of those who escaped the Soviet and Nazi regimes found new homes in Canada and have helped shape the strong and diverse country we know today. Their stories remind us that we all have a responsibility to ensure atrocities like these never happen again.”

‘Heed the Lessons of History’

In light of the Russian invasion of Ukraine earlier this year, Trudeau reiterated Canada’s support for the Ukrainian people in his statement.

“This year, we also stand in solidarity with the Ukrainian people, who continue to face brutal violence from Russia’s illegal, unjustifiable, and expansionist war of choice in their country,” he said. “Canada, together with our Allies and international partners, will continue to support Ukraine and stand up for democracy and human rights everywhere.

Alexandra Chyczij, National President of the Ukrainian Canadian Congress, an organization said to represent the interests of the Ukrainian community in Canada, also released a statement to commemorate the victims.

“We must heed the lessons of history to ensure that the crimes of the past are not repeated by today’s tyrannical dictators.”

Conservative MP and leadership hopeful Pierre Poilievre said under the totalitarian rule of communism and nazism, “the very worst of humanity is revealed.”

“We must never forget the brutality and suffering that always accompanies tyranny,” he said on Twitter.