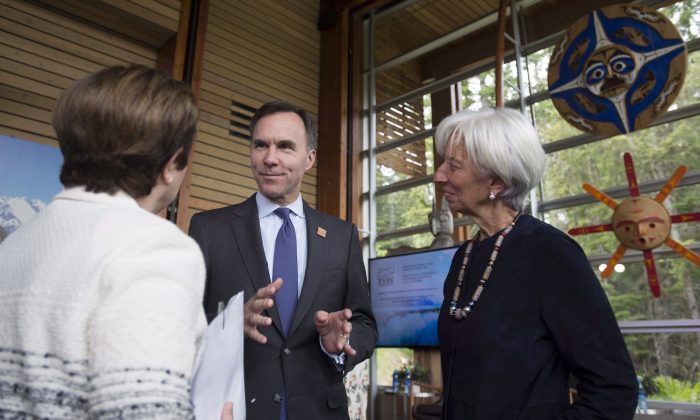 OTTAWA—A showdown over the competing economic visions of Donald Trump and his fellow world leaders is shaping up for their very first get-together at the G7 summit in Quebec on June 8.

Trump’s fellow G7 leaders will use their initial gathering in Charlevoix to confront the U.S. president over his controversial decision to impose punishing tariffs on steel and aluminum imports, senior Canadian officials said on June 5.

But Trump’s top economic adviser, Larry Kudlow, said Trump plans to use the G7 to extol the virtues of tax cuts and red-tape rollbacks that the U.S. administration says are responsible for fostering robust growth and low unemployment.

“America has a very strong growth story,” Kudlow said on June 5 on the Fox News program “Fox and Friends.”

“Business confidence is booming. We’re going to take that story to the G7 meeting. I hope that the other countries listen carefully.”

The remarks herald potential fireworks and could set the tone for what could be an acrimonious two days of talks that will test the ability of Prime Minister Justin Trudeau and his top officials to keep the group from splintering.

The G7 in Charlevoix formally kicks off with a session on jobs of the future and the state of the global economy, which is where Trudeau and others will push Trump to roll back the tariffs, said Canadian government officials who briefed journalists on the condition of anonymity.

Trudeau’s carefully crafted G7 agenda is under considerable strain following Trump’s decision last week to impose steel and aluminum tariffs on Canada, Mexico, and Europe. Officials insist there is still room for success on issues such as protecting oceans and educating girls in poor countries.

The tariffs, which prompted retaliatory measures from Canada and others, threaten to drive a wedge into the G7, fracturing the long-standing multilateral relationship into something observers describe as a “G6 plus one,” with the United States as the outlier.

Kudlow said he wants to see “a G7 meeting. I hope it’s not a G1 plus six meeting.”

Officials from Canada, the United States, and other G7 members, including the European Union, were working behind the scenes to craft consensus on at least some of Trudeau’s agenda.

“We are working on bridging differences that exist,” said one grim-faced Canadian official, who refused to say whether the G7 would be able to reach an agreement by the time the summit ends on June 9.

The raison d’etre of the G7 is to ensure economic growth, and “given the current environment,” the discussion will very likely move towards trade issues, the official said.

Trudeau and his G7 partners have criticized Trump’s administration for protectionist practices they say will hurt economic growth in the long term.

Finance Minister Bill Morneau, who hosted his own G7 counterparts last week in Whistler, B.C., said afterward that he expects the leaders to keep pressure on the United States to reconsider the tariffs.

Trudeau’s office says the prime minister spoke to provincial and territorial premiers on June 4 to update them on Ottawa’s response to the “unacceptable” U.S. tariffs.

Trudeau told the premiers he plans to vigorously defend and protect Canadian workers and industry and that he is committed to successfully renegotiating the North American Free Trade Agreement because it “is in the best interests of Canadians.”