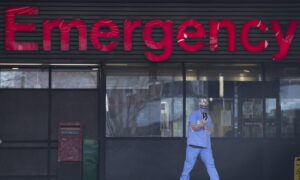 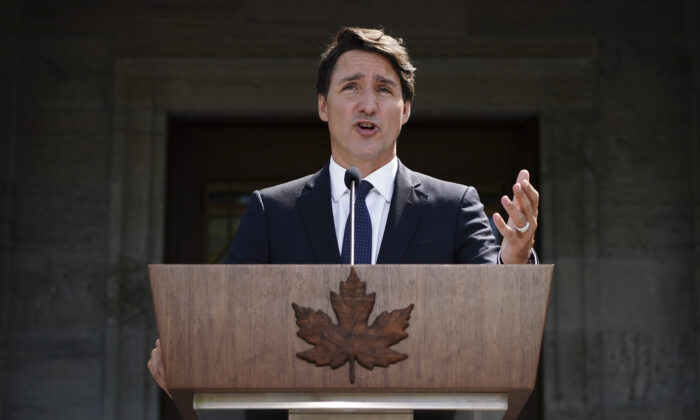 In a campaign stop on Monday, Trudeau defended the video, which accuses O’Toole of “considering privatizing the health care system” in the midst of the COVID-19 pandemic, saying the video was posted “in its entirety.” The Conservatives have accused the Liberals of altering the video in order to misrepresent O’Toole’s views.

“What’s really important here is that in the middle of a pandemic, Erin O’Toole came out, unequivocally, in support of private health care in terms of for-profit health care,” Trudeau told reporters during his campaign at Dalhousie University in Halifax on Aug. 23. “We posted the entire interview in its entirety and I encourage all Canadians to take a look to see what Erin O’Toole has to say about what he sees on the future of healthcare.”

Freeland’s video posted in French and English on Aug. 22 shows a July 2020 Conservative Party Leadership race interview in which O’Toole was asked to answer whether he would allow provinces to experiment with providing private, for-profit and non-profit services inside of universal coverage.

Canada's public, universal health care system is one of our greatest strengths. It's part of what makes us who we are as a country. Last year, as COVID-19 raged, Erin O'Toole was asked if he would bring private, "for-profit" healthcare to Canada. He responded unequivocally: yes. pic.twitter.com/dISRKrIjr0

In the clip, O’Toole quickly answered “Yes,” followed by “Now let me elaborate more.” At that point his reply skipped forward to other selected comments. Freeland’s English tweet also only mentions “for-profit” health care, omitting the “non-profit” aspect, which was asked in the question and which O’Toole commented on. The edited video was retweeted by Trudeau.

The Conservative Party responded shortly after on Twitter, accusing the Liberals of deceptive editing, saying “the video is altered in order to mislead Canadians.” It also includes the original full-length video which includes O’Toole’s comment that “universal access remains paramount.”

The Tories are asking Elections Canada to investigate the tweet as a violation of the Canada Elections Act, saying the Liberals intentionally altered the original video to make it misrepresent the position of the Conservative Party.

Kate Harrison, the interviewer who posed the question to O’Toole during the July 2020 Conservative Party Leadership race, also weighed in, expressing her disappointment at Freeland’s video tweet.

“As the person who asked the question, I’m disappointed to see the video was manipulated to exclude important context,” she wrote in a Twitter post on Sunday.

“‘We need to ensure universal access remains paramount.’ That’s a direct quote from O’Toole. It was cut from the edited clip. Strikes me that the thoughtful, detailed platform put out by the CPC has the other side spooked, apparently to the point they’re being actively dishonest.”

“The amateur cut and paste slapped together for this video is even more jarring when you look at what was used (and not used) in writing,” she added, retweeting a post by Laryssa Waler, who uploaded the transcript of O’Toole’s answer.

I always thought @cafreeland was better than the rest of the @liberal_party. A statesman.

But today, she tweeted a video that spliced the highlighted parts from this transcript 👇🏻 in an effort to mislead Canadians about @erinotoole’s position on universal healthcare.#cdnpoli pic.twitter.com/FI5XoxDueB

The Epoch Times reached out to the Liberal Party for comment but did not hear back by the time of publication.