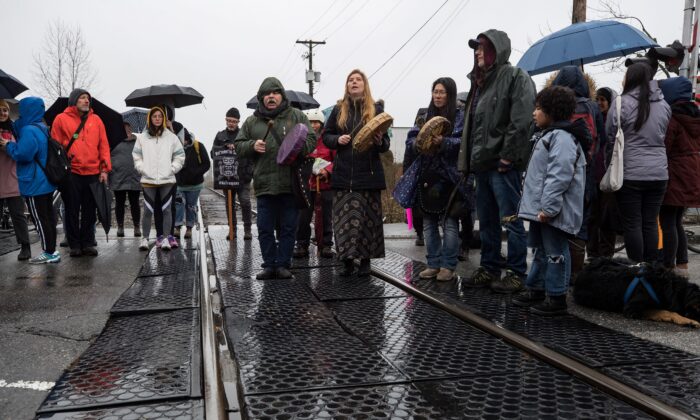 OTTAWA—Prime Minister Justin Trudeau was in talks over the weekend with federal cabinet ministers as protesters opposed to a pipeline project in British Columbia continued to halt train service across parts of the country.

Gagnon said Indigenous Services Minister Marc Miller also briefed Trudeau about his hours-long meeting Saturday with representatives of the Mohawk First Nation near Belleville, Ont., where a rail blockade has shut down train service across much of Eastern Canada.

Gagnon did not reveal what Miller told the prime minister, and said the government would provide updates as they become available.

Miller said during an appearance on CTV’s “Question Period” political show on Sunday that he believes a peaceful resolution could be reached as he pointed to the Oka and Ipperwash crises as reasons why dialogue is preferable over police intervention.

A police officer died during a police raid in 1990 when Mohawks at the Kahnawake reserve south of Montreal blocked the Mercier Bridge, which became the Oka crisis. Five years later at Ipperwash, Ont., one man was killed during a standoff over a land claim by Chippewa protesters outside a provincial park.

Miller said the economy is suffering as a result of the blockades, but the government’s response is a test of Canada’s ability to find peaceful resolutions to such disputes.

“Do we believe in peace and dialogue with people that we don’t necessarily agree with?” he asked.

“And the challenge I ask myself at the end of the day is do we use all means to ensure that there’s a peaceful resolution to this or do we just dig in like we’ve done for years and decades and come to the same conclusion? We keep repeating the same errors. So my advice to my colleagues is: Let’s ensure that we get to a peaceful solution. That involves dialogue.”

The Trudeau government has been criticized for not doing more to end the blockades, which have been erected to protest the Coastal GasLink project in northern B.C., which is part of a $40-billion LNG Canada export project in Kitimat.

A spokesman for Miller said he was not available for an interview on Sunday.

After meeting with members of the Tyendinaga Mohawk First Nation on Saturday, Miller said “modest progress” was made, but he wouldn’t elaborate.

“We talked openly, frankly, painfully at times, and sometimes with humour. There’s a lot more work to be done,” he said.

Miller said the focus of the discussions was on the natural gas pipeline that crosses Wet’suwet’en territory in British Columbia and is opposed by their hereditary chiefs. But he said other issues arose as well, without going into detail on what else was raised.

“The underlying issues did not arrive yesterday, they’ve been present in this community for hundreds of years.”

Members of the Gitxsan First Nation temporarily took down a rail blockade near Hazelton, B.C., Thursday pending a proposed meeting with the Wet’suwet’en hereditary chiefs, provincial and federal governments.

But while the talks have been represented as a joint meeting with the Gitxsan and Wet’suwet’en chiefs to engage in dialogue on how the impasse over the pipeline development arose, a Wet’suwet’en hereditary clan chief says leaders of his First Nation will only participate as witnesses.

Na’moks, who also goes by John Ridsdale, said the meeting was proposed by the neighbouring Gitxsan and the Wet’suwet’en chiefs planned to honour the invitation.

“We have a willingness to move forward positively, we still have that in our hearts,” he said Sunday, while adding the Wet’suwet’en chiefs won’t budge on the pipeline.

“Our answer isn’t going to change. The pipeline won’t happen on our territory.”

Fraser said a meeting is scheduled for Monday in Victoria. Senior ministry staff said Monday’s meeting would only be between Bennett and Fraser, and they are drafting a letter to the hereditary chiefs reiterating their desire to meet.

Meanwhile, the PMO announced that Trudeau would convene the Incident Response Group on Monday. The group was described upon its inception in 2018 as a “dedicated, emergency committee that will convene in the event of a national crisis or during incidents elsewhere that have major implications for Canada.”

Blockades in support of the Wet’suwet’en across the country have cut both passenger and freight rail services, including GO Transit services between Toronto and Barrie that were affected on Saturday.

Ontario Premier Doug Ford was among those calling for more federal action on Sunday, saying Trudeau must create and publicize a plan to end the blockades.

CN obtained a court injunction to end the demonstration near Belleville on Feb. 7, but the Ontario Provincial Police have not enforced it.

In Tyendinaga on Sunday, Karen Brant, who is non-Indigenous but lives on the reserve, said while the community is generally against the pipeline project, they’re split on whether the blockade is the right way to protest.

“People believe in what they’re fighting for, they’re just wondering about the impact it’s making on the economy,” said Brant.

“I think people are divided, but they believe in the cause and they want to fight for their cause.”

However, she said the issue has brought people together, and throughout the weekend Indigenous and non-Indigenous people showed up at the blockade to bring blankets, toiletries and warm food.

“It does pull the community together. It does show that kind of support that you might not have known you had before,” said Brant.

“It’s just unfortunate that it had to go this way to make a point.”

CN obtained fresh injunctions to stop three new blockades established on its rail network on Saturday—two in Vaughan, Ont., and one in Vancouver.

An injunction in B.C. was enforced earlier this month by the RCMP to give Coastal GasLink access to a work site for the pipeline. More than two dozen protesters were arrested for refusing to obey it.

Coastal GasLink has signed agreements with all 20 elected band councils along the pipeline route. However, Wet’suwet’en hereditary chiefs assert title to a vast 22,000-square-kilometre area and say band councils only have authority over reserve lands.