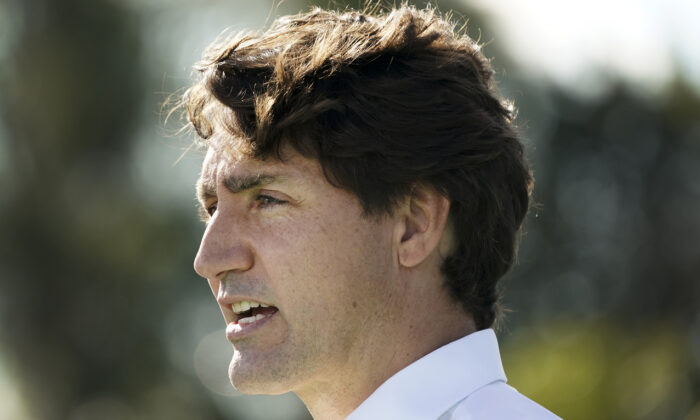 Liberal Leader Justin Trudeau condemned “angry mobs” after being hit with a handful of gravel while campaigning in London, Ontario on Labour Day.

Trudeau was boarding his campaign bus to leave the event when he was surrounded by protesters yelling insults. Gravel and debris were thrown at the party leader, while the RCMP security detail attempted to shield Trudeau.

When asked about the incident during a Sept. 7 press conference in Montreal, Trudeau called the incident “absolutely unacceptable.”

“It is absolutely unacceptable that people be throwing things and endangering others at a political rally,” he said. “Nobody should be getting that kind of intimidation or endangerment, that these angry mobs are putting forward.”

Trudeau said he felt some gravel hitting him, but was “physically unharmed.” Several members of the press were reportedly also struck, but also unhurt.

Conservative Leader Erin O’Toole condemned the incident during a press conference on Sept. 6, saying that “harassing the candidates of any party is unacceptable.”

O’Toole also wrote on Twitter that “political violence is never justified and our media must be free from intimidation, harassment, and violence.”

Trudeau has been meeting with protests in a number of campaign stops, including by those opposing vaccine passports. Trudeau left a B.C. neighbourhood in August after being chased by a crowd protesting mandatory vaccine passport systems.

A Liberal rally in Bolton, Ont. was also cancelled on Aug. 27 due to safety concerns. At the time, Trudeau said that he understood “the anger, the frustration, perhaps the fear,” that protesters might have, and acknowledged that Canadians have had a tough year during the COVID-19 pandemic.

But on Tuesday, the Liberal Leader appeared to change his tone, blaming “anti-vaxxer mobs” for disrupting his campaign events.

When asked why he changed his tone towards the protesters during the Montreal press conference on Sept. 7, Trudeau said a distinction should be made between “anti-vaxxer mobs” and people who “for various reasons are still hesitant to get vaccinated.”

“We will no longer accept for people who make the wrong choice to endanger those who’ve made the right choice, is how we get through this pandemic,” he said.

Other party leaders condemned the gravel-throwing incident during campaign appearances on Tuesday.

NDP Leader Jagmeet Singh said the gravel-throwing was “horrible,” when asked about the incident at a campaign stop in Toronto.

“I disagree with Mr. Trudeau all the time, but it is absolutely wrong to be throwing stones,” Singh said.

“Some idiot threw pebbles at Mr. Trudeau yesterday. I condemn it. Words are our weapons. But physical violence is always wrong,” Bernier said.

And at a campaign stop in Ottawa Tuesday, Bloc Québécois Leader Yves-François Blanchet told reporters in French that in a free society like Canada, “it’s never necessary or relevant to resort to intimidation or violence.”