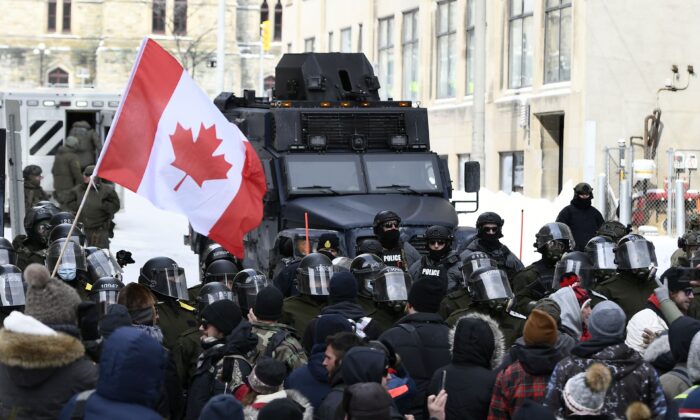 The night before the Liberal government invoked the Emergencies Act to deal with the truckers’ “Freedom Convoy” protest, Prime Minister Justin Trudeau’s national security and intelligence adviser, Jody Thomas, told cabinet members that “there was potential for a breakthrough” in negotiations with the protesters.

This was revealed in newly released documents on how the cabinet weighed in on a response to the three-week protest in Ottawa’s downtown core, in place since late January seeking an end to federal COVID-19 vaccine mandates and restrictions.

The documents were released after civil liberties groups requested that the attorney general disclose documents relating to the government’s decision to invoke the act. Heavily redacted and labelled as “secret,” the documents include minutes from three meetings of the Incident Response Group, a committee of ministers and senior officials chaired by Trudeau. The documents show that the committee had been discussing the possibility of invoking the act as early as Feb. 10, four days before Trudeau invoked the Emergencies Act.

The documents also include minutes from a cabinet meeting at 8:30 p.m. on Feb. 13, during which Thomas briefed the cabinet on the situation of the protest in Ottawa as well as border blockades at several Canada-U.S. border crossings held in solidarity with the convoy. Thomas noted that one major blockade at the Ambassador Bridge, which connects Windsor, Ontario, and Detroit, Michigan, was being lifted after the police began making arrests a day earlier.

Thomas noted that “law enforcement gains have been important and that there was potential for a breakthrough in Ottawa,” the minutes shows, but the rest of the notes from that meeting are blacked out.

In a written statement, Public Safety Minister Marco Mendicino’s office told Toronto Star that the negotiations with the protesters were “led principally by the city of Ottawa” and were “ultimately unsuccessful.” Trudeau moved ahead to invoke the Emergencies Act on Feb. 14, less than 24 hours after being told about the potential breakthrough.

At the Feb. 10 meeting, Mendicino said there was “a broader challenge with law enforcement” at the protests, as some officers “may be sympathetic to the protesters’ cause, resulting in reluctance to enforce.”

The Liberal government’s decision to invoke the act drew criticisms from members of the opposition as well as the international community.

Civil liberties groups like the Canadian Constitution Foundation (CCF) and the Canadian Civil Liberties Association (CCLA), both of which question the legal justification for invoking the Emergencies Act, have filed legal challenges against Ottawa for making this decision.

“Since that time our pro bono counsel have been trying to get answers from the government. What evidence did the government have to ground its invocation of the Emergencies Act, and what evidence justified the emergency orders they passed limiting constitutional rights across the entire country?” the CCLA said in a statement on Aug. 8.

The group said that “getting answers hasn’t been easy.”

“The government is relying on short public summaries of meetings from the ‘Incident Response Group’—but initially refused to even provide information of who attended at the meetings, meeting minutes, or notes. Only after months of pressure did they provide partial, highly redacted, disclosure of the information we had been seeking.”

The act gave the police additional powers to clear out the demonstration, including powers to compel towing companies to remove the trucks and vehicles parked in Ottawa’s downtown core. The police, carrying assault rifles and rubber bullet launchers, arrested over 100 people in escalated operations over the next few days, and in some instances, mounted police were seen knocking down protesters.

The act also allowed financial institutions, without having to obtain a court order, to freeze the bank accounts of individuals and entities suspected of making financial contributions to the movement. It was later reported that some banks froze accounts beyond the list of names provided by the RCMP.