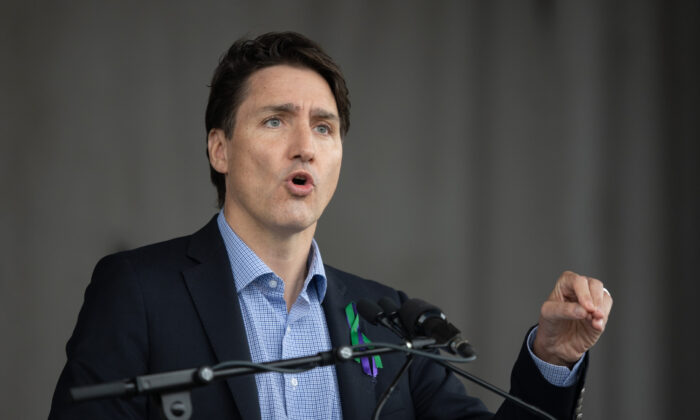 Prime Minister Justin Trudeau speaks during a ceremony in memory of the Afzaal family in London, Ont., on June 5, 2022. The Muslim family was run down in London a year ago on June 6 in a hate-motivated vehicle attack, resulting in the death of four members of the family. (The Canadian Press/Geoff Robins)
Canada

Prime Minister Justin Trudeau attended a memorial march on Sunday that marked the one-year anniversary of a deadly attack on a Muslim family in London, Ontario.

Transport Minister Omar Alghabra was also among the attendees, made up of the family’s relatives and friends along with community members, who called on all levels of government to address Islamophobia.

The family of five was intentionally struck down by a driver during their evening walk in London on June 6, 2021, the police said at the time.

Salman Afzaal, 46; his wife Madiha Salman, 44; their 15-year-old daughter, Yumnah; and her 74-year-old grandmother, Talat Afzaal, died in attack described by the police as an intentional act of hate due to their Muslim faith. The family’s 9-year-old son was hurt but survived.

The event, organized by the Youth Coalition Combating Islamophobia, was founded by Maryam AlSabawi, a close friend of Yumnah, with a group of friends. The coalition, with the help of educators, has since developed a lesson plan on the issue of Islamophobia for use by teachers in their classes in London.

Trudeau said his government has launched “a new anti-racism strategy and a national action plan to combat hate, which includes funding to the tune of millions of dollars [to] grassroots organizations, many of them Muslim, focused on fighting racism, intolerance, Islamophobia in communities across the country,” he said.

Several other events were held on Sunday that commemorated the first anniversary of the tragedy. A vigil will be held Monday evening, June 6, at the crash site.

Nathaniel (Nate) Veltman, 21, of London is charged with four counts of first-degree murder and one of attempted murder. The case has not yet gone to trial.