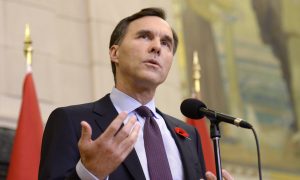 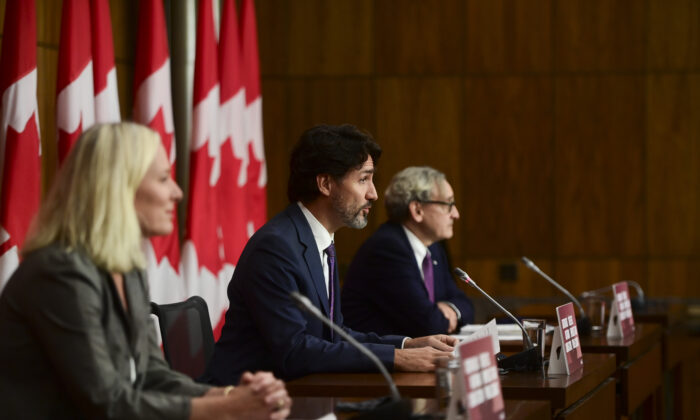 Prime Minister Justin Trudeau is flanked by Minister of Infrastructure and Communities Catherine McKenna (L), and Chair of the Board of the Canada Infrastructure Bank Michael Sabia, during a press conference in Ottawa on Oct. 1, 2020. (Sean Kilpatrick/The Canadian Press)
Canada

Prime Minister Justin Trudeau has announced $10 billion in infrastructure spending in such areas as clean energy, broadband, and agriculture that he says will create 60,000 jobs and boost the economy.

Trudeau announced the three-year Canada Infrastructure Bank plan at a press conference on Thursday along with Infrastructure Minister Catherine McKenna and Michael Sabia, who was appointed chair of the bank’s board in April.

“With smart, targeted investments, we can get people back on the job, grow the economy while building a healthy, sustainable future for everyone,” Trudeau said.

He said the money will be invested in projects ranging from “clean power, zero-emissions buses, and home retrofits, to broadband and irrigation infrastructure for farmers.”

The funding will go toward the following five initiatives:

Asked whether the growth plan includes the hospitality and tourism sectors that were hit hard by the COVID-19 pandemic, Sabia said that the top priority is implementing the five initiatives outlined in the plan. But he added that the bank will also look at a “variety of opportunities.”

The infrastructure bank was created by the Liberals in 2017 with a $35 billion budget to spend over 10 years with the goal to attract private sector and large institutional investors, to pay for what the government called “transformational” infrastructure projects.

However, the bank has been criticized for the relatively few investments it has made thus far, in just nine projects. During last fall’s federal election campaign, both the Conservatives and the NDP promised to abolish the bank if elected.

“Construction workers in New Brunswick, commuters in Montreal, and agricultural workers in the Prairies don’t need more Liberal hashtags and photo ops,” he said in a statement.

“They need an actual plan to build roads, bridges, and railways.”

The Liberals say the investment plan is part of the government’s promise in last week’s throne speech to create one million jobs and revive an economy ravaged by the COVID-19 pandemic. It is also intended to help the government meet its goal of net-zero carbon emissions by 2050.

Sabia said projects that get the bank’s backing would require them to contribute to economic growth, draw in private capital to turn $1 of public funding into $2 or $3 of spending, and help the bank earn back what it pays out.

He said the bank has already started the work needed to identify and review proposed and existing projects.

“The analyses have been done because we know where these projects are,” he said. “So this plan, as I said, is very real, very concrete, bottom-up build and we have a lot of confidence in it.”

“The public-private approach the Liberals continue to push consistently ends up costing Canadians more over the long term, while private investors can make millions,” he said.

Bloc Quebecois critic Xavier Barsalou-Duval said in a statement that provinces and cities need direct and unconditional federal funding to pay for projects. Instead, he said, the Trudeau Liberals are offering more loans.

Last June, NDP MP Guy Caron told The Tyee that the bank is a “boondoggle” waiting to happen.

“The government seems to be trying to convince us there won’t be any cost for the public in this, which is false because those private investors are not going to invest simply because they want to be generous,” Caron said. “They will want their return.”

With files from The Canadian Press. Scott Goulett contributed to this report.